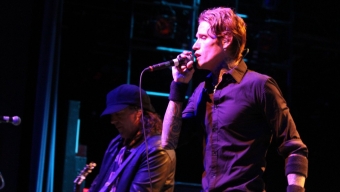 In the spring of 2006, the collective band of Buckcherry was mostly an afterthought. Following the release of their sophomore album “Time Bomb” in 2001- a fun and raucous record that received a decidedly tepid response from critics and fans alike- the band seemingly disbanded.  Singer Josh Todd took a shot on his own with 2003′s “You Made Me,” but the siren song of success that he enjoyed during Buckcherry’s self-titled debut in 1999 continued calling. With new pieces added around founding members Todd and lead guitarist Keith Nelson, it was with little fanfare that “15″ was released in April of 2006. That is until an unlikely song written about the sexual proclivities of a deranged girl brought the band literally back from the dead. And in unlikely fashion, the song and to a greater extend, the band, played as a springtime anthem in every strip club, bar and dorm room in America.

To commemorate the ten year anniversary of the release of “15″- an album appropriately titled for having been recorded in just fifteen days- Josh Todd, Keith Nelson and the re-formed Buckcherry triumphantly stopped at the Playstation Theater in New York City on Tuesday night, to celebrate the success of the platinum selling album. With support from Sons of Texas and grunge-rockers Candlebox, the band would vow to perform the “15″ album in its entirety, something that’s becoming more the rule rather than the exception as bands look for new ways to attract audiences to their live shows.  Fortunately for fans, the performance part of the equation has never been the issue for this specific band.

Though the seventy minute set certainly seemed to be abbreviated, performing an album filled with so many hits and ‘could-have-been hits,’ there was little for long time fans to take much umbrage with.  As the musicians took their positions on stage, Todd was the last to emerge, defiantly donning a red bandana shaped into headband form and dressed in black from head-to-toe- or at least until the singer would reveal his trademark tattooed torso later in the show.  Although most of “15″ was played out of order, the pacing of the setlist was nearly perfect.  The oft-forgotten “Sunshine” was an excellent choice to open the show with its fast-pacing and catchy chorus and the electric version of “Brooklyn” was perhaps not as memorable as the bluesier cut from the studio album, but performed in New York it was appropriately fitting nonetheless.  After all, we’ve all been ‘blacked out in Brooklyn.’

The show itself ranged from the gritty and heavy (“Broken Glass”) to the introspective and metaphorically drug-fueled (“Onset”).  But if the band accomplished anything- aside from putting on an always fun live performance- it was putting into context what a great rock album they seemed to stumble upon a decade ago.  Crowd pleasing singalongs like “So Far” and “Next 2 You” came one after another following singles like the undeniably charming “Everything,” a personal favorite of this writer.

Now any follower of Buckcherry can attest to the group’s utter crassness- after all, two of their most successful songs are about loving cocaine and having intercourse with a crazy person.  It was therefore no surprise when Todd took to the microphone to espouse his love for the female anatomy and ‘cameltoe pictures,’ a fetish which he openly and confidently admits.  And yet it’s that raw honesty that audiences seem to find endearing as one would be hard pressed to spot a crowdmember not jumping up and down and singing lyric by lyric to “Crazy Bitch”- and this was after the band’s slower apologetic love letter “Sorry”  (the group’s only track to touch the Top Ten of The Billboard Hot 100 – #9 (2008)) yielded a full on audience karaoke session.  Outside of “15″ the band dropped in “Tight Pants” from 2015′s “Rock ‘n’ Roll” and typical show closer “Lit Up,” which again invigorated the already wound up crowd on their way out the door.  Though the band’s songwriting seems to revolve solely around the same vices to which we can all relate- there’s something about Buckcherry that not only makes it acceptable, it’s a style that for this band, we roundly champion.