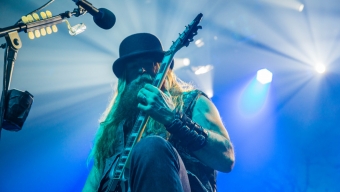 Metal master and guitar virtuoso, Zakk Wylde shredded, strummed and effectively melted faces throughout a blistering ninety minute set on Tuesday night in the East Village.  Marking his latest stop on the “Book of Shadows II Tour” which kicked off in early July, sounds were audible from the sidewalk of 11th Street just outside Webster Hall with the walls barely able to contain the sound waves being generated by the band inside.  Despite the fact that Wylde’s latest release is an acoustic record, fans were treated to an array of electric and unplugged tracks across the masterful musician’s two solo albums.  The exhibition of sheer unadulterated metal from the lead guitarist paired with some soft, shimmery ballads and body swaying rhythm sections displayed the unequivocal versatility and dynamic range that Wylde possesses.  And for those unfamiliar with his solo work, it’s the same Zakk Wylde look with an entirely different sound.

Light typically beats sound in travel but the audience’s ears were the first to absorb the presence of the supreme ax-wielder as set opener “Sold My Soul” began to fill the show room as Wylde pummeled the strings on his Warhammer.  The house lights soon dimmed and a shadowy figure with an extremely defined silhouette approached center stage. With only the slightest bit of contrast from a few stage lights beginning to brighten, fans erupted as the defining outline of a top hat that spilled long locks, a massive chain that hung from his hips and easily the most recognizable custom guitar on the music scene came into focus. “Sold My Soul” elevated the energy in the room immediately with its ferocious and often aggressive solos accompanied by Wylde’s unique showmanship.  Although his guitar, emblazoned with his iconic bulls-eye design, was adorned with plenty of picks, during this solo it was strings to teeth (take that, Jimmy Page) followed by an impressive stretch of behind the back playing to the delight of the live crowd.

After setting the crowd on absolute fire with a blistering solo, gears quickly shifted as the next songs were the first three tracks off from his latest album which gave the concert goers their first taste of acoustic for the night. While the tempo slowed and the band changed vibes from alt/grunge into an unplugged southern rock feel with “Autumn Changes,” “Tears of December” and then “Lay Me Down,” the crowd was seemed to appreciate each of the dynamic changes and collectively were just as excited to hear the softer, dare we say, soothing side from the Jersey jammer’s latest offering. From headbanging and throwing up horns and seamlessly transitioning into sways and lighters in the air there was zero shortage of audience excitement through the duration of the show. A brutal and merciless guitar solo marked the middle of the set; from that point on it became a pretty even 50/50 split of tracks between the electric and acoustic albums.

The back half of the set opened with the somber “Throwin’ It All Away” followed by the equally ominous and beautiful “Dead As Yesterday,” and it seemed that the roomful of fans adorned in leather vests, studded belts,and torn jeans could not get enough of the performance.  The show was capped off with another trifecta from the most recent album with “The King,” “Lost Prayer,” and finally “Sleeping Dogs” to fully satiate the rabid crowd’s appetite.  Fans of Black Label Society and Ozzy Osbourne who may have been unfamiliar with his solo work were introduced to a totally different side of Zakk Wylde who’s usual metal mayhem took a back seat for the more raw and intimate side of the rock star- which the vociferous crowd seemed to enjoy equally, if not more.