Shooter Jennings, On Target in Brooklyn 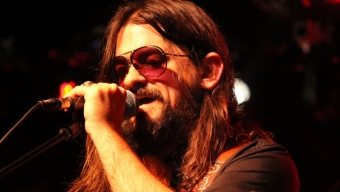 A small but excitable crowd awaited a bit of an unorthodox show in New York City on Tuesday night as Williamsburg’s versatile Brooklyn Bowl would play host to the arrival of southern outlaw country artist Shooter Jennings. His recently released 7th studio album ‘Countach (for Giorgio)’ continues along the enigmatic singer’s propensity to turn left while the rest of us are seemingly looking right- featuring guest spots from the likes of Marilyn Manson and Brandi Carlile. It’s a nine track mix of styles inspired by the work of Italian producer Giorgio Moroder and it even managed to land a spot inside Billboard’s US Dance/Electronic Albums Top 10 upon release. Just another ho-hum swerve for an artist that’s defied labels his entire career with country roots, blues in his blood, soul in his voice and progressive psychedelic metal on his resume.

The smashing of bowling pins would quickly be drowned out as Jennings took to the stage for his nearly two-hour set, seventeen songs of which spanned the crooner’s entire catalog. Donning a black shirt underneath his straggly brown hair and throwback shades, the bearded singer rarely took his foot off the pedal, unleashing a rousing and mostly up-tempo set to the utter delight of the hand-clapping city folk. Newly released cuts like “I’m Left, You’re Right, She’s Gone” and “Born to Die” blended in seamlessly with more familiar country rock tracks “Steady at the Wheel” and the feisty “Outlaw You,” both staples from a Jennings live set.

As rebellious as his outlaw persona might appear to some, Jennings is at heart a ‘Family Man,’ evidenced by the brief six song set that he afforded Jessi Colter smack dab in the middle of his Brooklyn performance. Colter, the former wife of country icon Waylon Jennings, is also Shooter’s mother and the New York crowd was more than appreciative as the pair collaborated on tracks like “I Ain’t the One” before allowing Colter an abbreviated turn in the spotlight. Seated at her keyboard, her pleasant and soulful voice capably handled tracks like “I Think You Know,” “Everybody Must Get Stoned” and 1975 breakthrough single “I’m Not Lisa” as the audience shuffled toward the stage to snap pictures of the performance on their phones.

Soon thereafter though, the stage once again belonged to Jennings as he and his bandmates tore through the remaining set with particular fervor. “Manifesto No. 1” is perhaps the singer’s finest feel-good song, evoking some of the fiery foot-stomping that you’d expect to experience at a country show. Fittingly, the Brooklyn crowd was willing to oblige on Tuesday as a small circle of dancing broke out as fans ‘let their hair down’ with excited abandon. “Gone to Carolina” meanwhile was a bit slower, still as stirring albeit in a different and more traditional way before the always excellently harmonized “4th of July” reinvigorated the audience as the show neared its conclusion. By the time the final chords of “Good Time Charlie” were plucked by the band – during which actors Ben Foster and Laura Prepon could be spotted dancing slowly in the back of the house with each tempo change- the nearly two hours of live music had quickly flown by. The raspy-voiced rocker may have an understated persona, but his musical virtues are so vast that they defy genre in a way that can only describe Shooter Jennings’ style as unadulterated Americana.