Drowners Showcase ‘On Desire’ at Baby’s All Right 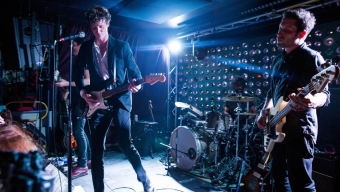 As the summer of 2016 officially kicked off, Indie rock band Drowners treated fans to an energetic live show inside Brooklyn music venue Baby’s All Right on Friday night. Performing in support of the release of “On Desire,” their sophomore effort officially released earlier that day, the upbeat and boisterous band rocked the sold out and tightly packed room for a full hour. Though the band’s singer has some Welsh in his blood, Drowners is a local band through and through, spawning a half-decade ago right here in New York City.  And as the group gets ready for a slot at Lollapalooza later in July, their show in Williamsburg proved to be much more than just a tune-up.

Friday night’s set showcased fifteen songs, covering nearly the entire new record while also leaning on several cuts from 2014′s self-titled debut. For spectacle’s sake, the stage was outfitted with an array of lights, which quickly went dark as the bandmates strode to center stage without hesitating. The feel good vibe of opening track “Troublemaker” proved to be the perfect choice for the warm weather night, giving fans a glimpse into a highlight from the new album as the first of a five song stretch of new material. The slickly riffed “Cruel Ways” in particular, seemed to get better as the song progressed, replete with a catchy and poppy singalong chorus sandwiched between its smooth and entrancing verses.

Frontman Matthew Hitt meshed a charismatic live persona with some laudable chops as he led the band through a multitude of new material. His bandmates to their credit continued to captivate the crowd, jamming into the 80′s-esque pop song “Conversations with Myself,” which forced the sold out audience to bounce up and down from its resulting melody. Other new standouts like “Human Remains” and “Trust the Tension” gave way for “Watch You Change,” punctuated by its guitar-mimicking vocal lines accompanied by a harmony fueled chorus. The crowd visibly swooned as Hitt continued to demonstrate his smooth and unique vocals alongside guitarist Jack Ridley III‘s infectiously catchy strums.

Although there was little more than a short and emphatic “thank you” between a few of the songs, the lack of crowd interaction was more than balanced by the amount of energy Drowners pumped out per track. With most songs clocking in at just around the three minute mark, the band managed to take the crowd on a lively journey in a relatively short time span. The last half of the show bounced back and forth pretty steadily between both albums affording concertgoers the opportunity to sing along with some favorites while taking in all of the new music the band threw their way. For a band that is a collection of relative newcomers, “On Desire” is a step toward musical maturity- evidenced by the musical talents on display on Friday night. The sold out Brooklyn crowd was quick to warmly welcome the arrival of Drowners to our area as the logical next step on the band’s journey moves from support act to headliner inside some bigger and bigger venues.