It’s All Funky and Fresh at French Cheese Board 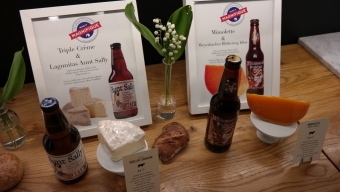 The space at SoHo’s French Cheese Board is part cheese shop, part gallery, part hangout spot. Â Primary among these is, unsurprisingly,Â theÂ cheese: pictures of cheese sculptures adorn the walls that are not displaying a giant map of France by cheese region or a diagram of various cheese making processes. Â And the events table is designed so that hands can reach a cheese board placed at the center from any point. Â If we seem to be experts on the space it’s because we trekked downtown on Wednesday evening for a ‘Beer and Cheese’ tasting experience that left us with renewed interest in two areas in which we had previously dubbed ourselves ‘experts.’

At first glance our hosts blended in with the assembled crowd on hand, casually setting upÂ the requisite selection of beers and cheeses we were about to enjoy. Â The relaxed atmosphere was a bit of a surprise given the subject matter, and I was a bit ashamed to have anticipated it being unapproachable (sorry, French things). Â After a few minutes of mulling about, we were brought together by, what else, cheese. Â Generous tasting plates were passed out as Beer Expert JohnÂ HollÂ reminded us that, â€œBeer and cheese have been enjoyed together, andÂ in many ways, more sensibly than wine and cheese, for centuries.â€ Â Bold start, but we wereÂ interested, if for no other reason than to see if he was right (note: he certainly wasnâ€™t wrong). Â After a quick intro on how to properly approach beer tasting (it involves a technique called the â€˜Bloodhound methodâ€™ of smelling aromas, my preference over the â€˜drive-byâ€™ approach),Â HollÂ jumped right intoÂ our pairings.

The tasting was designed to move from light to heavy in both beer and cheese characteristics. Â We started withÂ a Belgian-style pale ale fromÂ AleSmithÂ called â€œLilâ€™ Devilâ€ paired with the ever-popular Brie. Â While many serve this cheese with various accompaniments like jams and honey, its flavors were more subtly enhanced by this pairing. Â Its buttery notes were balanced with the aleâ€™s spice, while its earthiness was echoed by biscuits and a touch of honey without the sweetness. Â The next cheese,Â BrillatÂ Savarin, was aÂ gradual step in intensity. Â The rich, salty and ever-so-slightly sourÂ triple creamÂ made fromÂ cowâ€™s milk was paired with â€œAunt Sally,â€Â a sourÂ ale fromÂ Lagunitas Brewing Company. Â This was the most interestingÂ combinationÂ to us because it was the physical nature of the beer that really elevated the pairing. Â The carbonation in the beer cleared the palette for each successive creamy bite, allowing us to pick up more and more flavors. Â The beer itself was also enhanced by the cheese, its richness providing a platform for the tart, â€œcandy-bowlâ€ and nutty flavors (there was a long discussion about the similarities to those little strawberry candies that appear in every grandmother’s purse as soon as her first grandchild is born. It was, surprisingly, not inaccurate). Â The cheese disappeared from most of the tasting plates beforeÂ HollÂ could inform us that we might want to save a bite to pair with the last beer, an equally delightful pairing for the end of a meal.

First, however,Â cameÂ theÂ bright orangeÂ MimoletteÂ cheese paired with aÂ Barleywine. Â From WeyerbacherÂ brewery in Easton, PA, this 11.1%Â abvÂ brew called the â€œBlithering Idiotâ€ didnâ€™t manage to turn us intoÂ one, but can be a dangerous beverage when enjoyed so fully with a cheese like theÂ Mimolette. Â Holl described the pairing as â€œa complete cheese boardâ€ with stone fruit and malt flavors from the beer and sweet and nutty notes from the hard cheese. Â Â The cheese itself has an interesting history. Â Developed by Louis XIV to replace the popular – but imported from a warring Netherlands â€“ Edam cheese,Â Mimolettemore recently gained notoriety for being banned from the US. Â The mite content on the crust of the cheese was too high; it could cause an overreaction if consumed in large quantities, a legitimate concern based on how much we ate at the tasting. Â Between the high alcohol content of the brew and theÂ formerly criminal cheese, this dangerous pairing could quicklyÂ inspire some raucous activity (or more likely, a nap).

Speaking of dangerous combinations, the tasting was wrapped up with a BleuÂ dâ€™AuvergneÂ cheese and an Imperial Stout, a rich and assertive pairing. Â Both confident in their own right, this pair managed to highlight each componentâ€™s strengths. Â Certainly rich, this combo would best be enjoyed at the end of a meal as a final taste. Â The chocolate, oak and bourbon flavors ofÂ Hoppinâ€™ Frog Barrelâ€™s Aged B.O.R.I.S. would be delightful on its own, butÂ is balanced by the tangy notes of the Bleu cheese. Â  Personally, I never would have thought of pairing these two. Â This is why I was not leading the tasting. Â After some generous refills of cheese boards and cups, our hosts answered our questions andÂ encouraged us to try our own pairings.

The French Cheese Board has other upcoming tastings and events available on their website for those looking to gain some knowledge and perhaps to discover some new favorites. Â We recommend stopping in to see the experts for help choosing cheese and tuning intoÂ Hollâ€™sÂ Steal This BeerÂ podcast for a closer look at the many craft beer options available today. Â In the meantime, donâ€™t be afraid to tell your snooty friends you prefer pairing your cheese with beer rather than wine â€“ theyâ€™ll get right in your corner before long!