French Cheese Board: Art to See and Taste 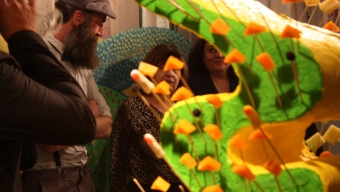 Curated as one part artistic showcase and one part tasting exhibit, the French Cheese Board would celebrate its official re-opening on Thursday on the west side of Midtown. One of the founding members of the esteemed â€˜Eat Art Movement,â€™ the works of French artist Dorothee Selz would be unveiled in an ornate and interactive display for dozens of guests to enjoy during the opening night festivities, kicking off a five week run at the space which lasts until November 15th. Incredibly unique and organically colorful, the experience of tasting some of the food being served was nothing compared to the sheer sights intricately spread throughout the space.

Almost immediately, we were greeted by a sizable and playful bright red shape welcoming us inside of the space. The surprised look captured on our faces brought over a tour guide to give us a brief walk through of the exhibition and more importantly, a history lesson of the Food Art Movement. Selz began in the 1970â€™s, where artists wanted to show that art was not just for the elite, but could be appreciated by everyone. Fitting examples were strewn all around the space from different canvases, art boards and sculptures that highlighted some of the artistâ€™s more approachable works.

Guests were actually encouraged to touch some of the sculptures- typically a no-no in the art world- but here, we learned that the soft bases of each work were made of sugar. While we were completely satisfied in touching them, we were admittedly a bit more hesitant to grab the many pieces of colorful candy, cheeses and fruits that were sticking out of them. Not that we werenâ€™t allowed — we just didnâ€™t want to take away from the aesthetic beauty of these works of art. Fortunately, the folks at the French Cheese Board provided a delicious cheese display of their own toward the back of the room- one that we joined some likeminded guests in indulging upon. After having our fill of all the bright artwork for the time-being, it certainly seemed time to sample some cheese.

Rich and creamy themselves, the cheeses managed to be surpassed by the array of breads that also acted as works of art of their own. Arranged in many different beautiful patterns, the soft slices were almost too pretty to eat, but we needed something to pair with each cheese. While each cheese was creamy and satisfying, our hands down favorite was the â€œBleu Dâ€™Auverne,â€ a rich cheese with a really pronounced taste. The breads were a bit harder to discern given their wild assortment of colors and styles, but a walnut raisin variety served as the perfect complement for the soft â€˜Bleuâ€™ that seemed to be a real crowd favorite.

As we did another walk-through, we made sure to pause briefly for a pour of some refreshing bubbly, as we watched a short video which described the bread making process. It turns out that the second walk-through was a necessary step considering how many small details we had missed the first time around. With pours of Champagne pairing with eccentric art and a selection of cheeses, youâ€™d be hard pressed to find a more satisfying evening even for the most casual art lover. And with a month left in the exhibit, youâ€™d better figure out a way to make your way over to the newly re-opened French Cheese Board, where art tastes as good as it looks.