Feel Good Night with Fitz and the Tantrums 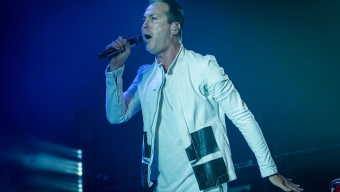 Fitz and the Tantrums

Concert Review: Fitz and the Tantrums at Terminal 5

On just the fifth stop of the “Get Right Back” summer tour, Los Angeles, California’s Fitz and the Tantrums took over Manhattan’s Terminal 5 stage last Tuesday night.  Touring in support of their self-titled album released earlier this month, the band packed fans into the venue and nineteen songs into a set list filled with a range of pop and synth tracks spanning their entire catalog.  Faces filing into the standing room space looked to be of all ages, indicative of the versatility of the band and their collective appeal to crowds both young and old.

The electric evening kicked off with support from ‘Finish Ticket,’ a group of youngsters from the Bay area who seemed to really strike a chord with the crowd still filing into the building.  While their originally penned tracks were certainly well received, a cover version of The Killers’ “When You Were Young” proved to be a perfect precursor to energize fans before the arrival of the evening’s headliners to the stage.  Seemingly, the very moment that the house lights subdued, an immense fan response was triggered as bright LED lights would soon radiate all around the front of the stage.

In a frenzy, the now fully assembled audience was blasted into an all-out dance party of catchy hooks and heart thumping rhythms while welcoming Fitz’s own Michael Fitzpatrick & Noelle Scagga front and center.  As Scagga emerged, swinging her hips with her red tambourine in toe, Fitzpatrick played it infinitely cool to the crowd. The backing band meanwhile was all smiles as they worked their way through hits like “Don’t Gotta Work It Out,” “Out Of My League” and “Break the Walls,” all of which followed the raucous opening track “Get Right Back.”   While all of the musicians seemed genuinely fueled by excitement during the performance, it should be mentioned that Fitzpatrick in particular would often take moments to pause and survey the crowd, looking to have been in complete bliss during the show

Remarking that ‘this show [is] becoming one of the best New York City shows we’ve ever done,’ the group ripped into the infectiously catchy “Hand Clap,” undeniably the band’s most familiar single from their latest album, the band’s third.  Featured all over television in the background of commercials for the new  FIAT 500x Crossover, the cut was an immediate hit with the audience as a sea of hands quickly flung overhead, clapping along in unison to every pounded drum beat.  Lead saxophone master James King was a particular standout here, roaring through the song’s hook by throwing himself right in the middle of stage, momentarily snaring the spotlight from the evening’s dueling singers in a particularly memorable moment.

The set would include other new tracks like “Walking Target,” “Complicated,” “Roll Up” and “Do What You Want,” each of which were crowd-pleasing additions to a night that was rife with them.  The energy was non-stop as the crowd continued to dance and sing along to all of the new music, particularly moved each time Scagga would add her stirring vocals to a fast paced track. Toward the back of the crowd a few couples would be found dancing hand to hand and even butt to butt as the evening would continue to evolve for some.  In fact, after awhile you almost forgot you were at concert. That was of course until the show neared conclusion and the band ripped into chart toppers “‘L.O.V.,” “Money Grabber” and of course, “The Walker,” laying down a full evening of feel good music on the ears of a crowd that was feeling pretty damn good.