Lukas Graham, All Energy at Sold Out Highline Ballroom 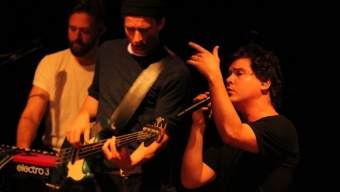 On the eve of a performance on ABC’s “Good Morning America,” Danish frontman Lukas Graham was warmly welcomed to New York City by a vocal and sold out crowd at Chelsea’s Highline Ballroom on Monday night. The seventy minute set was often an energy-fueled romp replete with measured audience clapping and sing-alongs to the brunt of tracks from the singer’s 2015 major label and self-titled debut. The intimacy of the ballroom, though certainly a highlight for fans, was barely able to contain the frenzy of activity emanating inside the space, where given the charismatic vocalist’s stage presence and musicianship, it’s fairly likely that New York audiences won’t catch Lukas Graham in another room this small anytime soon.

The evening kicked off with music of a different genre altogether as Atlanta’s Daye Jack would serve as the performance’s de facto opener. The 20 year old rapper is no stranger to Manhattan. As a music student at NYU, Jack released a 14 track mixtape produced in his own dorm room before inking a deal with Warner Bros. Records. Monday evening’s set would serve as a showcase for an entirely new audience likely hearing soulful cuts like “Hello World” and “Easy” for the very first time. Touring in support of his most recently released EP “Soul Glitch,” Jack looked entirely comfortable in front of a hometown crowd, alternating between singing and rapping with each punctuated beat. Though he worked through an abbreviated six song set backed by his DJ/hype man, Jack’s versatility shined throughout, earmarked by “Piggy Back,” perhaps the young artist’s most fully fleshed out track.

Perched from the Ballroom’s second level, we watched as fans began swarming the stage with anticipation between sets. Amid little pageantry, the seven-piece band would soon emerge, led by Graham, simply adorned in a pair of baggy jeans and a black t-shirt. Following a particularly soulful introduction of “Better Than Yourself (Criminal Mind, Part 2),” the band collectively revved up the octane with feel-good numbers like “Drunk in the Morning” and “Don’t You Worry About Me,” a particularly fun and fast paced track.

Between songs, Graham would address the crowd, often chatting openly and casually about the impact that his father’s death had on him as both a son and a songwriter. And while you might expect such honesty and vulnerability to bring the room down some, this openness allows fans to really identify in Graham’s mourning- and with that, relate to his artistry, making songs like the poignant “You’re Not There” all the more special. Graham’s distinctive high-pitched vocals really shine though when he’s forced to pick up the pace a bit and upbeat, catchy tracks like “Take the World by Storm” and the raucous “Strip No More” show his ability to let his hair down and let loose with his bandmates. Tall and hulking Bassist Magnus Larsson plays as the band’s perfect catalyst, often engaging the frontman in lightning fast knee-lifts during the show, but somehow the singer manages to keep it together and misses nary a beat while doing so.

Lukas Graham’s most successful hit to date has undoubtedly been the release of “7 Years,” an infectious pop track that’s garnered more than 170 million views worldwide as of this writing and has topped charts in more than a handful of countries. The ballad begins with a keyboard introduction but quickly builds to a hip-hop verse in an anthemic love letter about growing up and getting older; fortunately the live crowd was more than ready to handle most of the vocals here with or without Graham’s help. Watching a fully sold out room- filled with folks ranging in age from early teens to fifty and sixty year olds- belt out the same lyrics in unison was a fitting and appropriate sight for an artist who is just beginning his journey in the states and whose music evokes emotion in his listeners that goes far beyond some song on the radio. Lukas Graham seems to have really tapped into something here and evidenced by his sold out show in New York City on Monday night, he and his bandmates are just getting started.