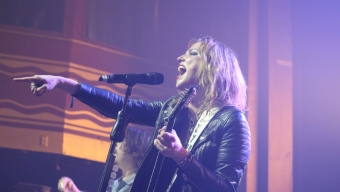 Set to embark on a summertime run aboard the Carnival of Madness Tour alongside Shinedown and Black Stone Cherry, Pennsylvania rock quartet Halestorm made a trip into New York City on Wednesday night in support of 2015′s “Into the Wild Life,” the band’s third album. With opening sets from fellow female rockers Dorothy and the legendary Lita Ford, Halestorm unleashed a fine-tuned live show on a jam packed and sold out Manhattan crowd for ninety nonstop minutes. The setlist would lean heavily on the group’s latest but also tapped into some fun covers thrown in for good measure and the requisite number of hits to round out a mostly high energy performance as the band wraps up their remaining dates on this leg of their run. To their credit though, New York City proved to be a raucous and vocal crowd for the duration- something the band seemed to genuinely appreciate as the show progressed.

Amid an entirely blackened stage, frontwoman Lzzy Hale would first emerge without her bandmates. Standing at a keyboard, the audience warmly welcomed her to center stage, often drowning out the vocals to stoic opener “God Bless the Beast” with their heaping praise. The end of the harrowing track would signal the arrival of the rest of the band to join Hale on stage and rip through crowd favorites like “Mz. Hyde,” new track “Apocalyptic” and “Love Bites (And So Do I),” allowing fans to sing along with the band. Drummer Arejay Hale meanwhile, as the band’s relentlessly energetic catalyst, would continually play to the crowd, removing his shirt to the delight of the many female fans in the standing room only space. He would later be joined on stage by drummers Bobby Rock (Lita Ford) and Zac Morris (Dorothy) for a ten minute duel of drum solos that was a fast paced visual to give Hale’s voice a much needed respite from the high pitch of “Rock Show” preceding the solo.

Outfitted in black from head to toe- from leather jacket to tight pants- eyes never veered far from Lzzy Hale as she alternated between playing rhythm guitar and the keys when each song would call for them. Vocally, she seems to also be hitting her stride, touching all (or most) of the highest notes with ease on tracks like “I Get Off,” “Freak Like Me” and “I Am the Fire,” perhaps the new album’s best track. The band has been known to record cover songs from other groups ranging from classic rock to pop, and so watching Hale briefly croon on a verse of Nazareth’s “Love Hurts” at her keyboard was a particularly fun moment for the crowd. But the show’s most memorable moment would see Hale welcome Dorothy frontwoman Dorothy Martin out to the stage for an absolutely rousing cover of “I Just Want to Make Love to You,” made popular by Willie Dixon or Etta James or Foghat, depending upon where you’ve heard it before. Nonetheless, the pair went back and forth verse for verse while Hale and lead guitarist Joe Hottinger exchanged riffs throughout the blues-fueled rock number.

Although hit song “It’s Not You” was noticeably left out of the set, the band made sure to close out the show by eschewing the charade of an encore- something Hale noted to the live audience and was met with loud supportive cheers. Rocking renditions of new single “Mayhem,” the slower and uplifting “Here’s to Us” and set closer “I Miss the Misery” would follow thereafter allowing the sold out crowd to sing along in complete unison. At the end of ninety mostly heavy minutes, the band took some time to bask in the adoration of live applause and the crowd wouldn’t let them down, showing some New York City love toward one of rock music’s hardest working and complete acts.