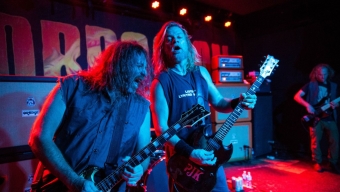 Devil horns were raised high into the sky Thursday night at a sold out St. Vitus bar, a venue that has beyond proven itself as a true focal point for the Brooklyn’s music scene. To commemorate the space’s fifth anniversary celebration, the venue welcomed venerable rock veterans Corrosion of Conformity back to New York City, returning for the second of two back to back nights. Though the building was definitively intimate, that sentiment would ring even more true during the show because it wasn’t just the room that was tight, there was a tightness within the band that created a family-like vibe throughout the evening.

Throughout the band’s three decades together, Corrosion of Conformity is a group that has almost come entirely full circle. Despite more than a handful of lineup changes since the band’s earliest days as a raucous punk outfit, three of CoC’s four original members, Woody Weatherman (lead guitarist), Mike Dean (bassist, vocals), and Reed Mullin (drummer) reunited to continue pushing forward their collective blend of now more mature southern heavy rock music. Led by the return of longtime frontman Pepper Keenan, who took a hiatus for nearly to ten years to work as lead guitarist in Down with Phil Anselmo (Pantera), the foursome has reformed a once powerful quartet that’s seen them headline shows around the world since the mid-1990′s.

Despite the band taking the stage late into the evening, it only seemed fitting that the foursome would launch into show opener “These Shrouded Temples,” the first track from 1991’s ‘Blind.’ The ominous two minute instrumental would soon give way to another opening track, “King of the Rotten,” a fan favorite from 1996’s ‘Wiseblood.’ It was here that the collective energy simmering in sweaty standing room only crowd would finally erupt, earmarked by pumping fists, banging heads, and mosh pits engulfing the room as CoC began to hit their stride.

Leaning on some of the band’s heavier material, crowd interaction would become an important part of the evening. Following an inspired rendition of “Senor Limpio,” Keenan pressed the vocal audience on which track from 1994’s ‘Deliverance’ that they would prefer to hear played: “My Grain” or “Shake Like You.” Almost unanimously, the sold out crowd chanted “My Grain,” and into it they went- lightning fast and heavy as hell. The crowd joined Keenan’s strained vocals in unison, screaming the chorus aloud so that the entire borough would surely awaken by the rocking sounds inside. Interestingly, later in the show “Shake Like You” would also come up a bit short- this time n energetic rendition of “The Door” would rock the house, with Weatherman’s quick moving fingers serving to slay the live crowd with tasty licks.

As the main set drew closer toward its conclusion, Keenan would introduce set staple “Vote With a Bullet” as “a song we wrote more than 20 years ago but is becoming relevant again.” Even guitarist Kelley Juett from opening band Mothership could be spotted in the crowd banging his head and singing along with nearby fans- a true display of genuine admiration and enjoyment that really got the crowd extra pumped for Keenan and the crew’s rhythmic riffs and baritone vocals. Over the course of the show each of the band’s five albums were leaned upon equally, though ‘Deliverance’ pleasantly received the lion’s share of the set. Though “Paranoid Opioid” unleashed the night’s biggest mosh pit on a crowd that was ready and waiting for one, “Clean My Wounds,” the band’s signature tune once again proved to be a timeless rock favorite as the room filled with Brooklyners once again would sing every lyric and bang heads together in synchronized metal fashion.