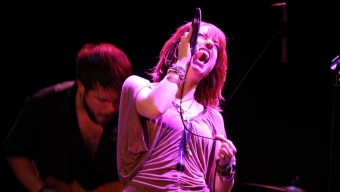 Sister Sparrow and the Dirty Birds

From the opening chords of funky opening track “Dirt” to the last remaining ones of main set closer “Mama Knows” and for nearly two hours in between, Brooklyn’s own Sister Sparrow and the Dirty Birds energized a sold out crowd at The Bowery Ballroom on Saturday night. Tapping a unique blend of blues and soul, the group’s style somehow seems both unique and familiar, backed by six talented musicians and a singer with seemingly limitless vocal capabilities, evidenced in each one of the band’s seventeen songs performed on this night. But the tempo throughout the course of the evening would rarely slow down as the standing room only audience would revel in the party-like atmosphere of a Saturday night show in New York City, led by a conductor with unparalleled charisma.

For years, the band has been tinkering with its live stage show, growing organically from playing to small local crowds at the likes of Rockwood Music Hall to far larger venues all over town. But given the complete performance that we witnessed on Saturday evening, a sold out Bowery Ballroom was a stop befitting a collective of musicians that deserve far larger praise and far larger audiences. And finally it seems, the rest of the city is ready to catch on.

Shortly after 10pm, each bandmate would begin to emerge from the backstage area with singer Arleigh Kincheloe or Sister Sparrow fittingly being the last to arrive. Despite some fun covers thrown in for contrast, the group would lean heavily on 2015’s “The Weather Below,” the band’s most well rounded and complete release to date. Replete with powerful horns and a captivating stage presence, the entire evening was a homecoming of sorts for the Brooklyn band, evidenced by the entirely appreciative live crowd- most of whom never stopped moving throughout the show.

It is hard not to stand in awe of Kincheloe’s vocals in a live concert setting. Her style rests comfortably somewhere between the soul of Alabama Shakes’ Brittany Howard and the bombastic raw range of a defiant P!nk. But in person, Kincheloe is an absolute revelation. When she’s not enthralling the audience with her lightning fast hip-shaking and tambourine slapping to each song’s measured beat, she’s holding extended notes with perfect pitch and allowing the audience to join in on the fun that she’s so clearly enjoying while performing. It’s a strange connection between Kincheloe and the sea of eyes staring back toward her from the floor- as a local product, she seems like one of ours and with that in mind, the band’s success is one that we as New Yorkers can truly appreciate. But her voice alone is one that’s worth the price of admission.

The set list, predictably was nicely assembled, giving the crowd little time to catch their breath in between songs. Showing a great deal of versatility, songs like the harmonica led “Catch Me If You Can” and the decisively bluesy “Borderline” were particular highlights early on in the set, both of which allowed the complete band to shine cohesively. Perhaps the evening’s most appropriate number though was the awesomely soulful “Don’t Be Jealous,” whose chorus proclaims ‘It’s just me and the fellas.’ The pointed verses of rhythmic reassurance aim to quell the many insecurities involved with a male dominated band that’s headlined by a talented female singer, and it certainly doesn’t hurt that the song is one of the group’s catchiest numbers. Pleasantly preceding the evening’s pop-friendly and deliciously infectious single “Sugar” which was another of the evening’s many memorable moments, the band added even more blues players and tapped The Doobie Brothers for a fun rendition of “Long Train Running.” A lively trombone player would join the already fast paced horns section to the delight of the live crowd, while Sister Sparrow yielded the spotlight to her bandmates for the brunt of the throwback track.

Although the group has been performing together only since 2011, their live show is indicative of an act with far more experience. The band eschews much in the way of stage show pageantry in order to let their collective musical talents stand out, but because the group is so immensely talented, the entire experience resonates in entertaining fashion. And led by a singer with one of the best voices that we’ve heard in quite some time, finally, it seems, that Sister Sparrow and the Dirty Birds are ready to take flight.