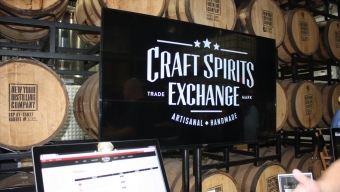 New York City has everything and fortunately just about any time we leave the comforts of our cramped apartments, weâ€™re usually headed toward something of interest. Wednesday evening, a quick trip into Brooklyn would bring us to a festive launch party, celebrating a brand new website with a unique concept. The idea, new to New York City, is an online community and marketplace dubbed Craft Spirits Exchange, a portal that incorporates reviews of different liquors, booze and various bottled alcohols be it from larger manufacturers or tiny local companies. The site also includes cocktail recipes, lists of awards received and local events for the craft spirits lovers in your area. Most importantly, you can also purchase the spirits directly from the website which allows CSX to become a hybrid of Trip Advisor, Yelp and Amazon all combined into one and completely dedicated to spirits.

Wednesday eveningâ€™s launch party was hosted at Brooklynâ€™s New York Distilling Company where the sprawling setting surrounded guests with bottling machinery and barrels along with several booths stocked with samples of rich spirits being poured by knowledgeable brand representatives. Each station utilized specific instructions to invite attendees to log in to CSX and get the ball rolling by reviewing what we had tasted in truly interactive fashion. Just as impressively, right outside the venue, literally on the sidewalk, was parked none other than The Taco Truck- a welcome sight for guests filing into the space. Their â€œCarnitasâ€ tacos were served piping hot, setting the table for some autumn weather drinking.

Once inside, our first stop was Siembra Spirits, where three different tequilas were being poured. Though weâ€™ve become shell-socked by the very thought of tequila following some painful morning hangovers in college- the Siembra â€œVallesâ€ was a smooth style that we were sweet-talked into tasting.Â  Fortunately, none of the nightmarish characteristics that we remembered existed in this easy-drinking sip.Â  Next, we moved on to Tuthilltown Spirits, where we were offered two of their vodkas and one gin. Distilled out of upstate New York, we were especially impressed by their â€œIndigenous,â€ a fresh pressed apple vodka created with 100% New York apples. We also enjoyed their delicious cocktail using â€œHalf Moon Orchard Gin,â€ made from New York wheat and apples but when infused with the cinnamon in the cocktail, it was the perfect drink for the first cool night of the season.

Although New York Distilling Company was certainly a gracious host, they were also on hand to serve some of their homegrown spirits. While we enjoyed their selection of gins (â€œDorothy Parker American Ginâ€ and â€œPerryâ€™s Tot Strength Ginâ€), our favorite tasting of the evening was the â€œMister Katzâ€™ Rock and Rye.â€ As big fans of whiskey, we were thrilled to try this new favorite of ours: rye whiskey & rock candy sugar- a sticky and sweet liquor that would taste deliciously when drowning a single sizable cube of ice. Without hesitation, we returned for seconds. As the evening of tasting commenced, we were walked through a live demonstration of CSX to check out its exceptional functionality and practicality. Both easy to use and relatively intuitive, CSX is certain to join our growing list of bookmarked sites.

Among some of the other delicious tastings of the evening that we savored, Compass Box Whisky Co.â€™s served five different varieties- two of which, â€œOak Crossâ€ (scotch whiskey with vanilla, clove, and fruity characteristics), and their grain whiskey, â€œHedonismâ€ were special standouts. At the Mezan table meanwhile, Warren Bobrow was a terrific host talking our team through the variety of different rums being poured before serving the eveningâ€™s best tasting cocktail- fresh with carrot juice, royal rose, orange bitters, seltzer, and rosemary sprig. It was the perfect blend of sweet with a nice kick of spice on the back end. Finally, we wrapped up our evening with the folks from Kings County Distillery. Against our better judgment, we managed to sip on each of their three delicious samples- â€œMoonshine,â€ â€œBourbonâ€ and their â€œChocolate-Flavored Whiskey,â€ which left us swooning. Almost immediately, we took stock of the local places in our neighborhood where the Kings County varieties are available, earmarking them for weekend visits. In all, we managed to taste some absolutely delicious new spirits brands, met some likeminded folks and uncovered an inventive new website and community all in the course of a single evening. Though we sometimes take it for granted, it sure is good to live in New York City.