Walk The Moon Strolls Through Williamsburg 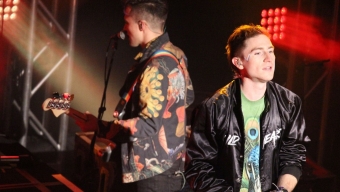 Concert Review: Walk The Moon at Music Hall of Williamsburg

2015′s biggest breakout band rolled into town Wednesday evening with a show at Brooklyn’s Music Hall of Williamsburg, in an evening that served as a precursor to a Thursday night performance at Central Park’s Rumsey Playfield. The intimacy of the small club setting fueled ticket sales to a sellout just minutes after their onsale date one week prior as some 500 New Yorkers would welcome Cincinnati foursome Walk The Moon into a sold out, standing room only space. And rather than ‘Shut Up and Dance,’ the audience predictably went wild for the entirety of the group’s nearly ninety minute performance.

The room would reach a fever pitch as the clock struck 10pm on Wednesday and the familiar African inspired sounds from The Lion King’s “Circle of Life” would bring the band front and center in humorous fashion. But in the sixteen songs that followed, there was nary a moment of rest in the bunch as frontman Nicholas Petricca‘s frenetic pace exacerbated the excitable audience with a relentless display of nonstop energy. Evidently Petricca is either pop music’s most physically fit frontman or it’s most tireless- nevertheless, he remained a dynamic catalyst throughout the evening, alternating between playing the keyboard, pounding his standing bass drum and swaying his swiveling hips to each and very upbeat track, while his surrounding band mates followed his lead.

Despite having played two headlining nights at Manhattan’s Terminal 5 back in April, it appears that local fans simply cannot get enough of the charismatic foursome as crowd intensity seemed to further with each passing song. As the lights flashed around the room during opening tracks “Jenny” and “Sidekick,” they would shine upon fan after fan with facepaint smeared along their cheeks, eerily similar to that of the singer standing above them. Though the setting certainly skewed younger, concertgoers of all ages had a hard time standing in place while the energy around the room remained as infectious as the songs themselves.

“Tightrope,” “Aquaman” and latest single “Different Colors” would each follow suit in similar fashion- a sea of arms thrusting overhead pausing momentarily alongside each of drummer Sean Waugaman‘s punctuated beats. Though the entertainment level remained steadily high, the collaborative harmonizing of the bandmates from song to song really allowed their talents to shine. And by the time that “I Can Lift a Car” built the crowd inside to a crescendo, the collective release during the aforementioned “Shut Up and Dance” was nothing short of orgasmic.  The evening changed from a performance to a party in an instant as each cluster of folks dancing inside the space intensified.

Fortunately the audience left some in the tank for the band’s two song encore, of which their first hit single- 2010′s “Anna Sun” was both pleasantly familiar and strangely nostalgic. For the fans though, it was just another in a line of hits that they’ve memorized since the band’s emergence at this decade’s dawn. In an entertaining evening filled with feel-good music coupled with the pomp and circumstance of a Broadway performance, watching the utter delight on the faces of so many fulfilled fans leaving the venue wound up being the night’s most unquestionably memorable moment.