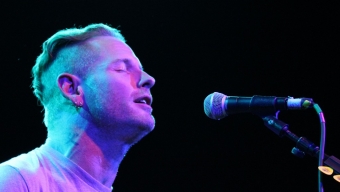 “With a full summer run hitting some of the country’s largest outdoor amphitheatres slated to launch at the end of the month which culminates in the band’s very own full-on festival, Slipknot frontman Corey Taylor somehow managed to find time to release his third book and pencil in ten solo and acoustic dates in early July. The tour’s very first stop in support of “You’re Making Me Hate You” brought Taylor into New York City where a sold out Irving Plaza audience would welcome the enigmatic singer on the day of his book release. For nearly two and a half hours, the crowd would be entertained by a performance that meshed stand-up with stories from the road, highlighted by a ninety minute set punctuated by more than a handful of inspired cover songs.

The show, originally scheduled for The Gramercy Theatre, was more recently shifted to the larger confines of Irving Plaza to accommodate the increase in ticket demand from the Slipknot faithful. Needless to say the standing room floor was jam packed with fans, many of whom were donning black Slipknot t-shirts and holding copies of Taylor’s book in hand. With nary an announcement, Taylor emerged from backstage underneath a sea of bright red lights and launched into nearly an hour of open mic mixed with an interactive Q&A. He bantered with the audience on his recent and very public criticism of Kanye West, a theme which would continue throughout the evening, before tackling topics like selfie sticks and a range of material covered in his book. Following a brief and insightful session with the audience- which also resulted in a fair share of hecklers begging for some music- Taylor left the stage momentarily, perhaps to put on his game face for the nearly 22 song set that would follow.

While Slipknot is certainly Taylor’s primary focus, many of the tracks performed during the course of the evening came from the singer’s other project, the wildly successful Stone Sour- a bit more hard rock than metal, whose tracks perhaps lend themselves better to the solo and acoustic setting that the frontman had laid out. Nevertheless, while the crowd was certainly appreciative of Taylor’s attempts at humor and story-telling, their collective explosion as he opened with a cover of Alice in Chains’ “Nutshell” into his own rendition of “Bother” unveiled an intense anticipation for his melodic voice. The latter in fact, allowed the audience to rally their voices so decisively that Taylor himself was brought to tears toward the track’s conclusion. It’s a connection to a fanbase that’s both inspiring and unparalleled, especially given the show’s intimate setting.

Tracks like “30/30/-150,” “Through Glass” and “Taciturn” were especially well-received but it was the selection of cover songs that Taylor inserted in the evening’s set that came as particularly big surprises, perhaps a glimpse into his vast range of musical influences. Lesser-known cuts like Mother Love Bone’s “Chloe Dancer” and Fear’s “I Don’t Care About You” touched on the grunge and punk fronts, while more traditional inspirations from Pink Floyd (“Breathe” and the excellent “Have A Cigar”) and Prince (“Little Red Corvette”) showed off the singer’s versatility.

What’s fascinating about Taylor though is his willingness to take chances with his versatile live act. His deep, sometimes gravelly voice is perpetually phenomenal, a skill that allows him to take risks on songs that work (Live’s “Lightning Crashes” was stirring) and even one’s that might need some tinkering (Green Day’s “Pulling Teeth,” in harmony with fellow guitarist Jason Christopher sounded just a bit off). But any metal singer with the chops to perform straight-faced (and admirable) covers of Chris Isaak’s “Wicked Game,” The Eagles’ “Take It Easy” and Bon Jovi’s “Wanted Dead or Alive” deserves credit for taking chances, especially in front of a crowd and city that can be unforgiving. Though fans can catch the full Slipknot- with masks and all- on August 1st at the Nikon at Jones Beach Theater, Taylor saved a fast paced acoustic version of the typically heavy “Spit It Out” as the show’s fitting closer; a bit of a different speed and key than the audience is probably accustomed to hearing. But different as the song may have been, Corey Taylor never fails to be entertaining and it’s his brash mixture of confidence and defiance that has prolonged an undying connection with his fans, no matter the project he undertakes.