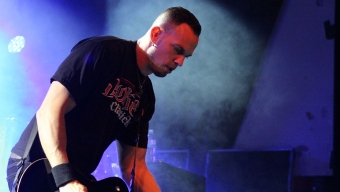 With less than a month before the release of the side project’s second studio album “Cauterize” (out June 9th), Creed and Alter Bridge guitarist Mark Tremonti and his backing band welcomed a few hundred hard rock enthusiasts into the Highline Ballroom on Monday night. The collective known simply as Tremonti, which initially spawned as a passion project that allowed the long time guitar-player to play frontman, has evolved into a quality standalone outfit, putting out a heavy blend of riff-based rock music as a result of the singer’s masterful playing. Despite the absence of Wolfgang Van Halen for this run (he plays bass on the new album, but is currently on the road with his dad and company), the band’s fourteen song set missed nary a beat in debuting more than handful of new tracks and much of their first album to a supportive New York City audience.

Devil-horns were symbolically raised high in the air in anticipation for the band’s arrival shortly before 10pm as the video board behind the stage began to flash the group’s tattoo-like logo. From the darkness emerged Tremonti himself, with his signature black t-shirt and black wristbands being the only evidence of a rock star about him- his short hair side-slicked and his trimmed shadow of a beard notwithstanding. That is, until Tremonti pounds his first guitar lick- perpetually heavier than you’d expect as a fan of Creed and even harder than Alter Bridge’s more melodic rock tunes. The group’s 75 minute performance reinforced their legitimacy with tracks like show opener “Leave It Alone” and new track “Cauterize” proving to be particularly rousing.

To their credit, the fans came fully prepared for the show- many of whom were donning black Tremonti t-shirts and singing along with the frontman as their heads pounded up and down in uniform fashion. Impressive new tracks like “Flying Monkeys” and recently released single “Another Heart” sandwiched older cuts like “Giving Up” and “Brains,” while Tremonti pulled out a little known cover of Big Wreck’s “Prayer,” performed admirably. The show’s finest moments were during Tremonti’s awesome guitar breakdowns where he’d stand in a shoulder-to-shoulder crouch with bass player Tanner Keegan and absolutely pummel his way through a catchy rock riff.

Though the aforementioned “Cauterize” is slated to be the next release, it’s been revealed that a second album was also recorded at the same time, fueling further fan anticipation for 2016′s rumored “Dust.” With a cohesive performance and a well managed set, Tremonti is certainly making strides as the singer/guitar player continues to craft a niche outlet for himself in an admittedly heavier genre. By handling vocals on his own- and more than capably at that- you get the sense that Mark Tremonti is perhaps most at ease when he’s in full control. Though he often plays second fiddle, the spotlight during Monday night’s performance shone fittingly on Tremonti alone.