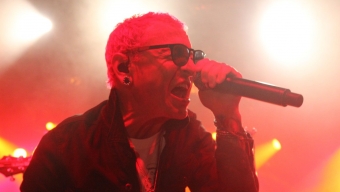 Despite the overwhelming acrimony that seems to loom over the heads of the members of Stone Temple Pilots and their former lead singer like a neverending cloud of rumors, he said/she said and legal paperwork, the remaining musicians forged on with a sold out show in New York City on Monday night. Had you taken a quick glance on stage from the back of the jam packed Irving Plaza, the colorfully-haired singer weaving around between guitarists Dean and Robert DeLeo might have been mistaken for the band’s original frontman Scott Weiland. In the wake of Weiland’s reported 2013 firing, Linkin Park’s Chester Bennington would more than capably fill in for the enigmatic singer in a side project that both brings big name recognition and some much needed new breath into a band that’s been challenged to make much progress, a potential byproduct of Weiland’s challenging persona.

If there’s anything that I’ve taken from watching Myles Kennedy (frontman for Slash’s touring band) and Chester Bennington attempt to recreate the many rock anthems crafted by Scott Weiland’s vocals it’s that Weiland the singer, cannot be duplicated. It’s not necessarily that his vocals are so wide ranging, but that he’s simply been the perfect fit as a singer for each of his bands. Right place, right songs. Admirably though, Bennington has become a suitable addition for the 2015 version of Stone Temple Pilots. Streamed in real time on Yahoo Live, Bennington and the remaining members of STP put on a rousing two hour performance that may not necessarily have harkened back to the band’s glory days but they were damn sure close.

Though technically Bennington still fronts Linkin Park, his role as the de facto singer for STP seems to be gaining permanence.  In support of the group’s “High Rise” EP released in 2013, the band performed together on stage as if a huge collective weight had been lifted off their shoulders- the brothers DeLeo in their ability to perform without obstacles or incidents and Bennington in his ability to enjoy a creative outlet outside of Linkin Park. It’s been said that Bennington had always considered fronting Stone Temple Pilots his dream job- and the trio that spent much of the show at the very front of the stage together genuinely seemed to be enjoying themselves. And collectively this version of Stone Temple Pilots worked together quite well.

The band has been out of the spotlight for such an extended period that you almost lose track of their incredible body of work- that is, until they start reeling off hit song after hit song. Bennington cut his chops on iconic singles like “Vasoline,” “Wicked Garden’ and “Sex Type Thing” right out of the gate, gesticulating around on stage as if the familiar songs were controlling him. Sprinkling in lesser known tracks like “Pruno” (from 1999′s “No. 4″) and “Coma” (from 2001′s “Shangri-La Dee Da”) around “Crackerman” and “Big Bang Baby” kept the crowd guessing as the show progressed, as the four bandmates on stage never looked anything but comfortable. Even a particularly aggressive fan halting the performance of “Creep” in the middle of the song couldn’t bring the room down- though Dean DeLeo would eventually stop the show and mandate that the fan be thrown out of the venue, the entire room seemed to enjoy the minor bit of conflict. Once the fracas died down, I don’t think there was a person in the house not singing along.

Among the show’s many highlights, “Plush” was a particularly stirring rendition with only Bennington and Dean DeLeo collaborating together, backed by the vocals of the entire audience joining the pair before the rest of the band would similarly follow suit. “Interstate Love Song,” “Down” and “Trippin’ on a Hole in a Paper Heart” would come in short order, before “Dead & Bloated” would conclude the band’s vigorous performance in trademark fashion as their unofficial show closer. More often than not, replacing a band’s singer proves to be the kiss of death for once wildly popular bands. The addition of Chester Bennington though has almost granted the re-formed Stone Temple Pilots ‘supergroup’ status. But where others have failed, there’s clearly a mutual admiration and respect within this lineup and the music that they’re able to create together more than lives up to the band’s long standing reputation and proves worthy of their history.