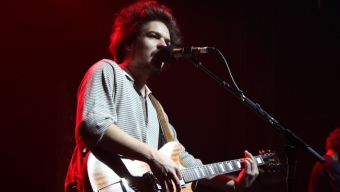 It’s been nearly two full years since the initial release of “Stolen Dance,” the insanely catchy first single from German duo Milky Chance. But it was only as recently as this past fall that the United States really took note and the song would subsequently explode domestically. The ensuing result, a slew of sold out tour dates at clubs around the country and the first of which welcomed throngs of excitable fans to New York City’s Webster Hall on Tuesday night as part of a two night stand for the electronic-meets-folk duo that’s in the midst of a meteoric musical rise.

Though the wild-haired Clemens Rehbein remains Milky Chance’s focal point as the group’s frontman, drummer/DJ/producer Phillipp Dausch deserves equal recognition as its stabilizing force. Together, the pair invigorated the New York crowd over the course of a mostly relentless, energetic ninety minutes that was rife with bouncy tracks and eye-catching lights that would captivate even those concertgoers not necessarily tripping on acid. The cavalcade of colors played as a backdrop though to the duo’s modest charisma. Dausch mostly pounds away quietly, shrouded behind an elaborately dressed up combination of drums and electronic equipment. Rehbein meanwhile, though front and center, rarely does much to engage the audience- instead using his deep and often mumbled vocal stylings and wildly energetic guitar-playing to do so for him. And the combination of each element manages to make for an incredibly likable stage show, furthered entirely by track after track of unique feel good music.

A jam packed room of screaming fans welcomed Milky Chance out to a completely dark stage following a brief instrumental intro. Launching into the reggae-laden “Stunner” as the band’s opener only further fueled crowd anticipation with most of the standing room space being occupied by pockets of folks dancing in place. The dreamy “Fairytale” and catchy folk-forward “Flashed Junk Mind” would soon follow suit leading to a sea of camera phones being held overhead to capture some of the experience that the show would provide.

Tapping bassist and harmonica player Antonio Greger for the group’s live tour would be a stroke of genius as Milky Chance’s “Sweet Sun” would be the show’s eventual highlight. Greger’s infectious harmonica playing (worth a search on YouTube) during the track’s foot-stomping chorus would only amplify the performance of the other musicians on stage- leading to a particularly electrifying portion of the evening. Inevitably, “Stolen Dance” would close out the show’s main set, performed in a slightly different key but equally as lively and merry for everyone involved. The song’s initial chords in fact stopped some folks from leaving the venue dead in their tracks- only to have them return to the all-out dance party happening back inside of the Grand Ballroom.

Following a brief wait, the group returned for a fun two-song encore, highlighted by show closer “Down by the River” from the group’s most recent EP release. With only a handful of years experience under their belt, Milky Chance has already managed to piece together a command of their live performances, complemented by many of the bells and whistles best associated with that of a veteran act. With their next set of local shows slated for the Central Park SummerStage this coming July, this may have been the last opportunity to catch the band in such an intimate setting. Unless of course you have tickets for tonight’s show- in which case you get to re-live the same magic, all over again.