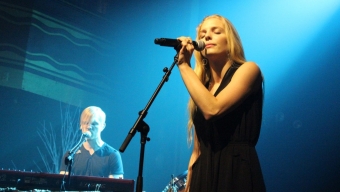 If you weren’t standing amid the swarm of concertgoers inside of Webster Hall’s Grand Ballroom on Tuesday night, then I hope you had a good reason. Touring in support of their recently released sophomore album “After It All” (Released April 7th), Durham, North Carolina folk-pop act Delta Rae triumphantly returned to New York City, unleashing an eighty minute set that showcased all of the pomp and circumstance of an arena show inside of the diminutive East Village music hall. And almost as immediately as the six piece band took center stage, there was no standing still for the rest of us as we once again marveled at the unheralded group’s collection of supreme talent.

Where to begin with a band, whose four principal members each take separate turns singing lead vocals and each on their own is entirely capable of being their own solo act. Utilizing an array of unique instruments and showcasing their penchant for live show theatrics, there was nary a moment during the entire performance where fans weren’t captivated by the musicians on stage. Although half of the band is made up of siblings Eric, Ian and Brittany Holljes, it’s the addition of Elizabeth Hopkins’ incredible pipes that yields the unparalleled dynamic between this foursome- from the harmonies to the foot-stomping to the little smirks they offer to one another on stage- that makes their live stage show far more veteran than their two album releases might otherwise imply.

The defiant new track “Outlaws” kicked the show off in energetic fashion, a feeling that would rarely let up during the course of the evening. Even ballads like Eric Holljes’ solo version of “The Meaning of it All” featuring just the singer and his piano was particularly inspired; the stirring rendition left much of the crowd in awe at his wide vocal range by the song’s end. Kicked off by an awesome violin intro, the uplifting “Run” started the folksy foot-stomping and hand-clapping early on to every beat of Mike McKee‘s frenzied drums. But where Delta Rae is perhaps most distinctive is in their ability to pen these chant-heavy tracks, backed by incredible kick drum and bass lines that transform each song from catchy pop tune into a dancing, screaming in-person rallying cry. On the electrifying “Chasing Twisters” and the haunting set closer “Bottom of the River,” there’s almost a ghostly presence joining the band on stage, as the flutter of colored lights seemingly meets each of the band member’s movements in phantom-like fashion.

Fortunately, the spectacle of the show itself allows the audience to focus more on the band’s talents than on all the bells and whistles. A stripped down A cappella style rendition of the unreleased “Any Better Than This” featured the four main performers brilliantly harmonizing and clapping around a single microphone as Grant Emerson‘s bass playing provided some backing fodder for the interactive crowd-pleaser. Again though, it was Hopkins’ remarkable vocals on “If I Loved You” that proved the be amongst the show’s finest points as the entire crowd sang along to the ridiculously catchy break-up song with the energy and enthusiasm of a far larger audience.

A cover of Sia’s “Chandelier” would fittingly conclude a fun encore, with the anthemic “Dance in the Graveyards” featuring a tease of Whitney Houston’s “I Wanna Dance With Somebody” sending the live crowd home on a high note. You’d be hard pressed to find much to criticize at Delta Rae’s most recent stop in New York City, during a show that seemed to build to a crescendo from start to its pinnacle of a finish. Much as we felt in the hours that followed our first time seeing the band back in June, Delta Rae again managed to exceed our lofty expectations by somehow improving upon an already excellent and polished live show.