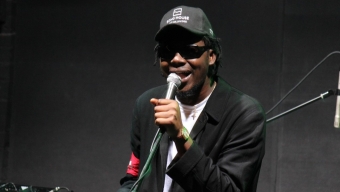 A chilly Monday evening did little to keep the swarms of people from a completely sold out Bowery Ballroom where Brooklyn native Theophilus London was making his first area appearance since the November release of his album “Vibes.” That night, London swooned a jam packed Soho House during a VIP setting that was greeted by the likes of Kanye West and Kim Kardashian. And though Monday’s showcase was a bit lighter on the star power watching from the audience, London ensured that it was his own star that shone brightest for all to behold.

Taking the stage shortly after 10pm, London spent the better portion of his ninety minute set keeping everyone on their toes, switching up styles and mood from song to song. In fact, London is perhaps best described as a hybrid performer, utilizing a multitude of genres and styles in a stage show that swings wildly from hip hop to electronic to crooning over an R&B track while slow dancing with some of his adoring female fans right up on stage. Eschewing the use of a DJ, London himself conducts each set using his MacBook which remains front an center and each song is backed by a live three piece band that does their best to match the singer/rapper’s intensity and stage presence.

With promises of special guest appearances for the hometown show, London didn’t disappoint with the likes of Devonte Hynes and Leon Ware making stage-front cameos in between the likes of the guitar-shredding Andrew Watt and rapper Manolo Rose, accompanied by nearly a dozen of his buddies. But the show itself served to highlight London’s talents, despite apologizing for the absence of Kanye West following a blistering rendition of “Can’t Stop,” featuring a studio recording of the rapper’s verse. Though much of the set revolved around newer material, the frenetic chorus of “I Stand Alone” was a particular highlight from London’s 2011 full length debut “Timez Are Weird These Days.”

With such drastic transitions from soulful tracks to high octane thumpers, it would have been easy for the crowd to become disengaged with the show- but to London’s credit, he managed to keep all eyes on him all evening long whether pulling up fans on stage or crowd surfing over their heads during his set.  New tracks like “Do Girls” and the catchy “Heartbreaker” and “Need Somebody” particularly invigorated the live crowd who seemed to be waiting all evening for the show’s eventual show closer “Tribe,” a fun and fast paced track that features London’s rapping skills laid over a radio friendly electronic beat. Matched with an equally eye-catching light show, the room exploded into an all out dance party fueled by London himself and his band, each of whom took it up an energetic notch for the song that would close the show. For an hour and a half, Theophilus London, the performer, unleashed a dazzling array of musical talent and a penchant for performing that allowed every fan in the house to find something that spoke to them. And Monday night’s show proved that despite just two albums under his belt, the jack-of-all-trades performer seems to be just getting started.