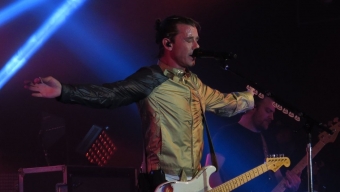 If you’re under 35 years of age, you almost certainly owned a copy of “Sixteen Stone”-  that all-to-familiar copper-colored cover image with white cursive font outlining some British band named Bush.  That means you’re likely in one of two camps- a female, utterly and completely infatuated with the band’s frontman Gavin Rossdale or a male, more likely to have lied about owning said album before going home, drawing the shades in your mother’s house and hoping not to ‘let the days go by’ in the same vein as one of the band’s most popular ballads. Either way, released in late 1994, the band exploded into our collective consciousness with a smattering of hit songs and music videos that allured us toward their charismatic frontman. And now twenty years later, despite some lineup re-shufflings, Bush triumphantly returned to New York City on Tuesday night where a nearly sold out Best Buy Theater was stuffed with fans awaiting the band’s anticipated arrival.

Touring in support of October’s ”Man on the Run,” the band’s sixth studio release, you might have expected Rossdale and his mates to have slowed down some as he miraculously nears his fiftieth birthday. His energy-laced performance proved nothing of the sort as the band exploded onto center stage with “The Sound of Winter,” a peppy, catchy opener that appropriately started the show on the right foot. Looking as if he’s barely aged, Rossdale bounced around on stage with his short hair pulled back above a tight white shirt and an NBA style shooting sleeve, likely to keep his strumming arm warm as he led the band through tracks like “This House Is on Fire,” an outstanding take of “Greedy Fly” and “The Chemicals Between Us.”

Equipped with plenty of bass heavy tracks laid down by Corey Britz, the band’s one hundred minute set continually peppered the audience with faster rock tracks rather than ballads, allowing Rossdale’s relentless energy to rarely waver. Vocally, the frontman remains at the top of his game evidenced by his ability to admirably hit just about all of the notes in songs regardless of where they were released in the band’s catalog. New tracks like “The Gift” and “Man on the Run” were performed with the same vigor as the likes of “Speed Kills” and “Swallowed,” though candidly the grungier “Letting the Cables Sleep” was perhaps the band’s non-encore shining moment.

Before launching into a string of their iconic and most successful singles to close the show- sandwiched around a fun Talking Heads cover of “Once in a Lifetime”- Rossdale remarked that in appreciation of their fans, the band makes sure to play the many hits that brought them to the dance. And so capping the main set with “Little Things” into a raucous encore of “Machinehead,” a stirring solo rendition of “Glycerine” and finally closing the evening with “Comedown” all made plenty of sense. The entire room erupted for the show’s final 25 or so minutes as Rossdale would leave the stage bringing his energy with him out onto the standing room floor and even up toward the venue’s seats, giving fans exactly what they were hoping for- up close and personal. Perhaps that explains the band’s staying power over the past two decades- exceeding audience expectations time and time again.  Though they’ve certainly been written off more than once, Bush still seems to have their best days ahead of them.