The Glitz and Glamour of Steel Panther Returns to NYC 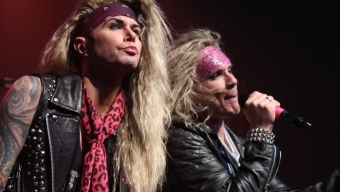 It’s never not a party when the west coast glam rockers of Steel Panther come to town. Fresh off of the release of their brand new holiday single “The Stocking Song,” the raunch-filled rock stars brought a familiar taste of their brand of misogyny and deviance to a completely sold out Gramercy Theatre on Monday night. Though the leftover holiday lull may have depleted the jam packed crowd’s energy some, the foursome’s perpetually entertaining hijinks and penchant for fully rocking out in authentically glitz-filled fashion made sure that the entire room remained charmed for each of the set’s 100 minutes.

Though the banter during Monday evening’s performance was certainly familiar, Steel Panther’s refreshing ability to be so uniquely 1980′s and so unflinchingly ball-busting toward each other culminates in an unparalleled live show- one that’s part performance piece but also one that’s quite fantastic musically. Their lyrics are absolutely over-the-top, certain to be offensive to some- but part of the band’s charm is their ability to deliver the lines so matter-of-factly and with such sincerity that you can’t help but to belly laugh at their antics. With tracks like “Gang Bang at the Old Folks Home,” “Just Like Tiger Woods” and show opener “Pussy Whipped,” one can only shudder to think what the band’s relatives had originally thought as the four musicians initially embarked on this journey.

As usual, the group’s showmanship was on full display the minute the band emerged from backstage. Led by ageless frontman Michael Starr and lead guitarist Satchel doing the brunt of the mic work, the pair joked relentlessly about sexual proclivities far too crass for print.  Their banter though is often the highlight of a Steel Panther concert- whether aimed at each other or specific faces in the onlooking crowd. With three full length album releases now under their belt, the band has eschewed playing cover songs while out on tour (their weekly residence at Hollywood’s House of Blues is a must-see attraction) but judging by the sheer number of guys dressed in wigs and tights in the audience, nobody seemed to mind all that much.

But to dismiss Steel Panther solely because of their humor would be doing their skilled musicianship a disservice. Crowd pleasing anthems like “Tomorrow Night” and “Party Like it’s the End of the World” are roaring, raucous rock songs while catchier yet still gratuitously lewd ballads like “Girl From Oklahoma” and “Community Property” harken back to some of the best glam rock tracks released in the early 1990′s. Extreme only wishes that they could sell out a room this size in New York City in 2014 with every member of the crowd proclaiming their private parts to be available for everybody. (ed. note: former Extreme drummer Paul Geary is the band’s manager) And there was of course the requisite performance of the catchy, tongue-in-cheek rock track “Asian Hooker,” where security ushered a busty Asian fan from the front of the audience up on stage for an all out dance party to the crowd’s delight.

Monday night’s show at the diminutively sized Gramercy Theatre was a bit of a departure for the band- who, aside from their last local appearance opening for Judas Priest at the Barclays Center in October, have become accustomed to taking the far larger Irving Plaza stage. Nevertheless, the band pulled out all the stops as fast paced tracks like “17 Girls in a Row” and “Death to All But Metal” reinvigorated a surprisingly subdued audience. To no surprise, the room exploded for the evening’s show closer, the incredibly unheralded “Party All Day,” a deliciously defiant rock anthem from 2009′s “Feel the Steel” that encompasses everything that Steel Panther is all about in just over three electric minutes. Outrageous, hilarious, and rocking- just like the band itself.