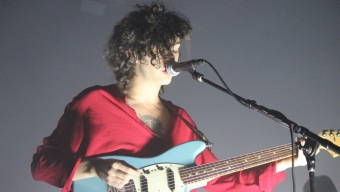 The first of two sold out nights at Terminal 5 might be cause for a victory lap for some bands. But not for Manchester, England’s The 1975, a four piece outfit whose rapid ascension and penchant for writing upbeat indie-pop tracks culminated with their first appearance in Manhattan since the spring. The back to back nights of performing seem to be a precursor to their eventual run at arenas across the country but on Thursday night, the exhuberant audience was treated to a fun performance inside of the ‘intimate’ three floor setting, surrounded by 3000 of the band’s most ardent supporters.

Though the band’s catchy pop tracks skew the audience admittedly younger, to their credit, the musicians on stage don’t spend much time pandering to the slew of screaming girls that await their every glance. Instead, they’ve honed an energetic stage show replete with minimal yet eye-catching lights which serve to complement the group’s frenzy of activity. Following a rousing set by Philadelphia’s CRUISR, the four musicians strode out a stage masked by fog and bright white lights as the familiar sounds of “The City” further amplified a jam packed crowd filled with anticipation.

Cloaked in a thick layer of stage smoke, the band’s enigmatic frontman Matt Healy still manages to own all of the eyes in the room. Donning a red long sleeved shirt with a deep enough V-neck to allow his ‘Annie’ inscribed tattoo to be seen, Healy methodically led his bandmates through a quickly moving set that exceed twenty songs. And whether he was singing familiar lyrics, lending his talents on his blue rhythm guitar or slugging down gulps of what appeared to be wine straight from the bottle on stage, the audience was utterly captivated throughout meeting his every movement with audible reaction. Though the band continues to tour in support of their self-titled debut released more than a year ago, their brisk 75 minute set also touched upon tracks like “Me” and “HNSCC” plucked from The 1975′s previous EP releases. The setlist seemed to matter fairly little to the fans on hand, who roared with pleasure at the opening chords to each song equally and without exception.

Tracks like the 80′s inspired synth-pop cuts “M.O.N.E.Y” and “Pressure” and the slightly sedated but heartfelt “fallingforyou” all seemed to hit a particular note with this audience as if they’d been waiting for each of them. But unsurprisingly, The 1975′s most successful singles to date decidedly made the crowd explode. Though Healy would plead with the audience to put down their phones before launching into the catchy “Chocolate,” few adhered to this mandate as much of the venue showed a sea of hands and bodies moving around rhythmically. Show closer “Sex” was both a fun and fitting choice to send fans home happy as the young girls stared up at the band’s singer in complete adoration wondering aloud “Does he take care of you / or could I easily fill his shoes,” all the while hoping that Matt Healy was singing that very line to each of them.