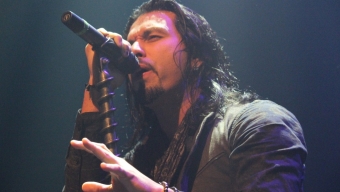 In direct defiance of the repeated and premature pronouncement that rock music is in fact dead, a five band bill took center stage at the Gramercy Theatre on Wednesday night in front of a sizable crowd of rock fiends. Headlined by Grand Rapids, Michigan’s Pop Evil, the reasonably priced bill delivered considerable value and the band themselves delivered in performance alone during a 15 song, 75 minute set that ranged from acoustic to arena style rock inside of the diminutive sized theater. Though the band’s late start time (10:40pm) may have relegated some to head toward the stadium style seating in the back of the venue, those who remained on the standing room only general admission floor were able to fully experience the full on musicianship and the range of the five piece band.

Traditionally, Pop Evil had been straitly a support act, with opening slots on tours for the likes of Papa Roach, Five Finger Death Punch, and Judas Priest. But the success of their recent album releases has catapulted them into headliners and the years spent toiling on the road have allowed the band to truly hone both their set and stage show, which is short on theatrics but refreshingly old-school for the genre. Taking the stage in front of a large black curtain donning the group’s moniker, frontman Leigh Kakaty led his his band out casually with each skilled musician taking their allotted position. A small riser placed on stage was put to good use throughout the band’s performance where time after time as many as four members would play toward the live crowd at once- usually egging them on with their energetic and eccentric playing. Drummer Josh Marunde meanwhile, wildly moved behind his drum kit- standing and sitting at will- but pounding his sticks frenetically all evening long.

Touring in support of their 2013 release “Onyx,” Pop Evil made sure to touch upon enough of the new material as well as some old tunes to satiate long time followers. Draped in a scarf, Kakaty’s long hair bounced in the spotlight with every vocal extension. The band wasted few moments in getting started as they tore through their opening tracks “Flawed” and “Behind Closed Doors,” among their most raucous rock-fueled songs. Though we’d love to see a return of the slow pop ballad “Stepping Stone” into the group’s setlist, the similar in nature “100 in a 55” was equally as welcomed in the middle of the set which took the rock down a notch, followed by “Monster You Made” and a stirring acoustic rendition of “Beautiful” performed solo by Kakaty.

Just because Pop Evil isn’t afraid to flash their softer side doesn’t mean that they don’t rock the house- evidenced by the band’s first hit single- the perpetually awesome “Hero” and more recently “Last Man Standing,” which effectively blew the roof off of the Gramercy Theatre. Several times throughout the show, Kakaty would stand in the glare of the house lights gazing out toward the crowd almost in disbelief that so many in attendance would recognize the many songs he’s penned. And though the clock approached midnight, closing the show with “Deal with the Devil” and the electric “Trenches” was a stroke of brilliance. The fast paced tracks erased any lethargy inside of the room as a sea of devil horns were raised over head in a show of support for the hard working rock outfit, who probably doesn’t get enough recognition as a five piece back of road dogs who’s favorite thing on earth is giving everything within their ability to their fans from the stage.