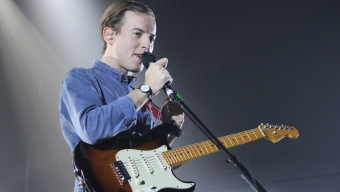 When we last left London’s Bombay Bicycle Club, the band was celebrating their second of two sold out nights at Manhattan’s Webster Hall at the beginning of May. What we said then:

Though the band continues to ascend, Wednesday night’s show served to show off their spurt in popularity over just five short months housed by the far larger tri-level space at New York City’s Terminal 5. The bigger venue hardly seemed to affect the band though as their more than ninety minute set continued along the same path that they initially forged in the spring. And their sea of youthful and exuberant fans seemed similarly inspired by Bombay Bicycle Club’s penchant for live performances in a manner that far exceeds their years.

While the band’s setlist remained fairly consistent to their previous shows, the raucous ovation that they received between songs proved that song choices mattered little to their loyal fanbase- most of whom spent the better portion of ninety minutes singing along with frontman Jack Steadman in unison. The melodic “Overdone” has become the band’s unofficial opener of sorts but the song’s slow build and catchy high pitched chorus establishes that it’s an ideal precursor for the nineteen songs to follow. Meanwhile five circular video screens stand behind the musicians on stage each working collaboratively with trippy illustrations coinciding with every note of the group’s songs.

The familiar “Shuffle,” followed in short order and Bombay Bicycle Club’s first single was- to no surprise- a huge hit with the live crowd, all of whom seemed to dance in place seemingly together, like a make shift flash mob. In one of Steadman’s brief addresses to the standing room audience, he encouraged fans to whip out their phones to during “Home By Now” with submissions likely to be utilized for the band’s next video.  A sea of small lights ensconced the standing room floor as arms were stretched over head as fans yearned to be a part of the band’s history.

Undeniably the group’s focal point, the blonde haired Steadman carries himself on stage like an everyman and the group collectively performs with a certain humility and genuine positivity that exudes from their every note. Bass player Ed Nash and guitarist Jamie MacColl flank their singer, but never stand still long enough to connect with anyone but their instrument of choice- in a good way. It’s that passion for the three band mates up front that makes live cuts like “Rinse Me Down,” “Evening/Morning,” and especially “Feel” so intensely captivating.

Bombay Bicycle Club harnesses a multitude of different sounds in their live show from folk to electronica, so fittingly, the band ripped into a cover of Robyn’s 2007 “With Every Heartbeat” to appropriately switch up the predictability of the evening. But a return to form with singles like “Luna” and “Always Like This” reinvigorated a room of fans up for the challenge of trying to keep up with the musicians moving around in front of them on stage. The fast paced “What If” and the decidedly 80′s “Carry Me” would close out the show in eclectic fashion for a band that seems to garner influence from a plethora of different eras and styles, but somehow manages to mobilize each of them in a creative vision all their own.