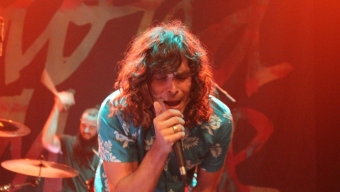 There was hardly much of a pause- forget about a slow ballad- on Tuesday night at the Gramercy Theatre as Los Angeles’ Youngblood Hawke ran through an energetic fourteen song set at a frenetic pace. The band made up of six musicians, wasted little time with fan interaction and instead opted to pound through much of their 75 minutes at a feverish pace, somehow staving off any signs of lethargy without any sign of downtime. The small albeit vocal New York City crowd meanwhile spent much of the show jumping in place and waiving their hands overhead for the relative newcomers, a band that formed in late 2011 and are currently riding the success of their 2013 debut “Wake Up” with a jaunt aboard The Gospel Tour, led by Panic! at the Disco.

More and more often we’re seeing the emergence- or dare I say the resurgence- of bands which feature male and female leads harmonizing collaboratively, a dynamic even shared by show openers Caught A Ghost.  Fortunately this is just one of Youngblood Hawke’s many competencies- their versatility in playing multiple instruments while at the same time blending vocals effectively over the pounding drum beats of their talented stick man Nik Hughes- a drummer who proved to be an equal focal point as the show progressed with every trouncing of his wooden sticks.

Kicking off at 9:30pm, the show was a nonstop romp from beginning to end as the members each pummeled drums of their own.  The amplifying precursor led into opening track “Rootless,” a feel-good anthem that would set the stage for much of the sounds performed as the show progressed. The very poppy, very 80′s inspired set would be punctuated by frontman Sam Martin, festively donning a green Hawaiian shirt and long brown hair which resembles Workaholics star Blake Anderson, sans-mustache of course. Fortunately for Martin, he can sing. And his on stage collaborations with bandmate Alice Katz are a big part of what makes the band so much fun to watch- the pair is having as much fun on stage as their audience is down below, alternating between playing the keys, the drums and singing at every turn.

Tracks like “Dreams” and “Live and Die” were particularly catchy, giving Katz ample opportunity to shine vocally. But it was Martin’s parading around the stage that proved to be the catalyst for the rest of the band, elevating their every movement as his vocals reached their high pitched zenith. The indie-pop outfit paced through songs like “Stars,” familiar to most of the audience and perhaps the lesser known but equally as fun “Survival,” though it was the more infectious and catchy “Dannyboy” that revved up the crowd most in the band’s return from a brief encore.

Saving their catchiest and most popular tune for last, the band managed an outstanding version of “We Come Running” despite the absence of the West Los Angeles Children’s Choir as featured on the studio version. Regardless, the audience filled in admirably as Martin and company fueled the chorus’ rallying cry in stirring fashion. Closing the show just as ferociously as it began, a furious drum medley once again broke out- this time with all six members pounding drums and cymbals in unison. The crowd meanwhile had no choice but to stomp their collective feet and watch in awe, a show of appreciation for the performance they’d just witnessed, where Youngblood Hawke had undoubtedly left a trail of sweat on stage while playing their hearts out.