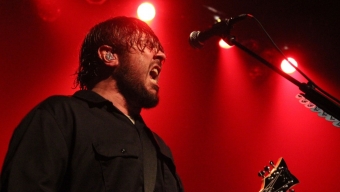 To say that Seether’s Shaun Morgan is a frontman of few words is a bit of an understatement. And while the band’s singer and lead guitarist isn’t much of an orator, he and his mates continue to raise and carry the flag of a genre prematurely pronounced dead years ago, allowing their musical virtues to speak louder than their voices ever could. Tuesday marked the release day of the band’s sixth studio album “Isolate and Medicate” and Seether celebrated by hosting a sold out show at Manhattan’s Gramercy Theatre amid a room jam packed with die hard fans.

Not much has changed since we last saw Seether, performing in the same New York City venue as they did back in 2011. The South African grunge trio has recently added new guitarist Bryan Wickmann to the touring mix, allowing them to relieve much of the burden that rested so heavily on Morgan’s shoulders and also to layer out the guitar sound quite a bit. Shortly after 9pm, the band emerged, lining up at their respective spots- Morgan per usual perched himself at stage right giving the rest of his mates ample space to move around.

Despite the release of their new record, the band’s set wasn’t all that drastically different from their last show in New York all things considered as they performed 14 songs in a very workmanlike 75 minutes. Though certainly a bit abbreviated for a headliner with their history, Seether’s fine tuned show was effective nonetheless. Churning out rock singles for more than a decade, the set felt like a greatest hits showcase with a sprinkling of five new songs to mix it up some. “See You at the Bottom” proved to be a particularly effective opener for the set, a slow building rock track in traditional Seether style that culminates in Morgan’s raw reflective chorus of gritty screams.

Band staples like “Gasoline” and “Fine Again” followed soon their after, to strong ovations from the standing room audience and while the performance of “Broken” wasn’t necessarily as stirring as it had been in the band’s last go round which featured an acoustic guitar, it’s perpetually among the group’s finest moments at each show. Interestingly Morgan and company didn’t banter much with the audience in between songs and instead fans were treated to metal riffs on loop during several of the interludes which saw the musicians changing guitars. All of this mattered very little though as electrifying cuts like “Rise Above This” and newly released single “Words as Weapons” continually ignited the excitable crowd.

The band saved many of their biggest hits to close the show with catchy singles like “Tonight” and “Country Song” effectively setting the stage for the likes of “Fake It” and the defiance-fueled “Remedy” to close out the encoreless set. In retrospect, Seether’s no-nonsense performance should probably be lauded for the time that they avoid wasting on stage with unnecessary theatrics, forced dialogue and even their lack of an encore which let’s be honest, has become a bit passe over time. Seether is an unapologetic rock band that continues to release meaningful music that galvanizes their fans with well written, invigorating songs that translate to their live show, which has been kicking ass for the better part of twelve years.