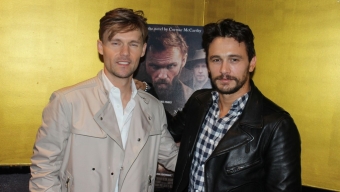 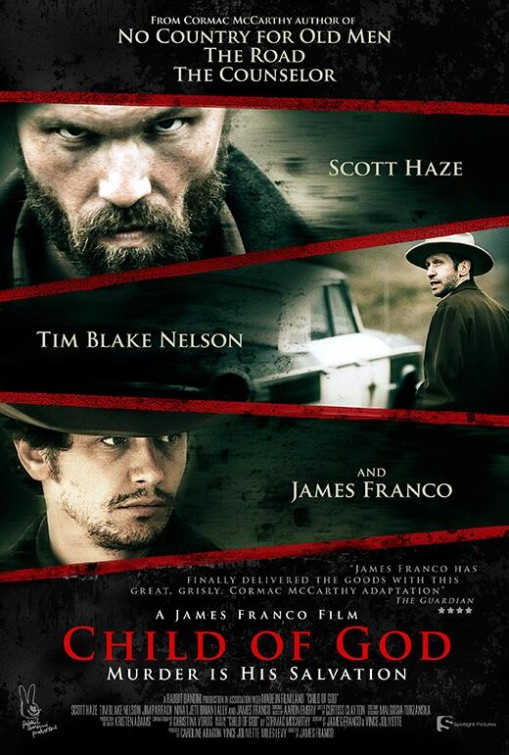 The latest adaptation of a dark Cormac McCarthy novel comes to the big screen courtesy of the versatile James Franco, who has harnessed the creativity of a student, an actor, a screenwriter and in this film, a director, into his own personal artistry. “Child of God,” opening in limited release on August 1st, is simply the unveiling of his latest canvas. The film, starring little known actor Scott Haze, is cinematically jarring and almost certain to be a polarizing depiction that straddles the line of questionable obscenity between shock value and performance art. And yet, despite the eye popping scenes which feature actual defecation and startling acts of necrophilia, there does appear to be a certain level of profound introspection that you take from the film- especially if you believe the words of the director himself.

The film follows the often strange story of the ostracized Lester Ballard (Haze) beginning just as his father’s land has been auctioned away from him, following his father’s suicide. Though this begins the viewer’s dalliance with following the violent and troubled man-child, its clear that by this point, he’s been entirely shunned from the townspeople. From here, Ballard’s dialogue is minimal as he is banished to live in the woods with the sole company of his rifle- hunting animals for himself to eat and living and sleeping where he can, until he stumbles upon a running car with two dead teenagers in the back seat. Although teased beforehand, Ballard here crosses the unspeakable line where the misunderstood protagonist effectively reveals his maniacal tendencies and his criminal acts ensue.

Chased by the local town sheriff throughout the film who sniffs out Ballard’s undeniable creep-factor, the lead perpetually returns to his father’s house presumptively to prey upon the man that snatched it from under him. But underneath the hoopla of the ongoing investigation and surveillance lies a startling struggle with a man unto himself, surviving by any means as he physically and mentally tries to cope with his own loneliness. At times, his only friends appear to be his weapon, his animals (both living and stuffed) and some corpses, while most interactions with the living causes him to behaviorally explode. The resulting final scene, which can be a bit squeamish to watch for different reasons, underwhelms some given the crescendo toward which the film had built- but in the end, “Child of God” is an artistic work that deserves to be examined in its totality rather than one that’s discussed because of its difficult-to-stomach subject matter punctuated by a handful of hard-to-watch scenes. And in that light, perhaps Franco’s undeniably difficult adaptation of McCarthy’s work should be summarily lauded. 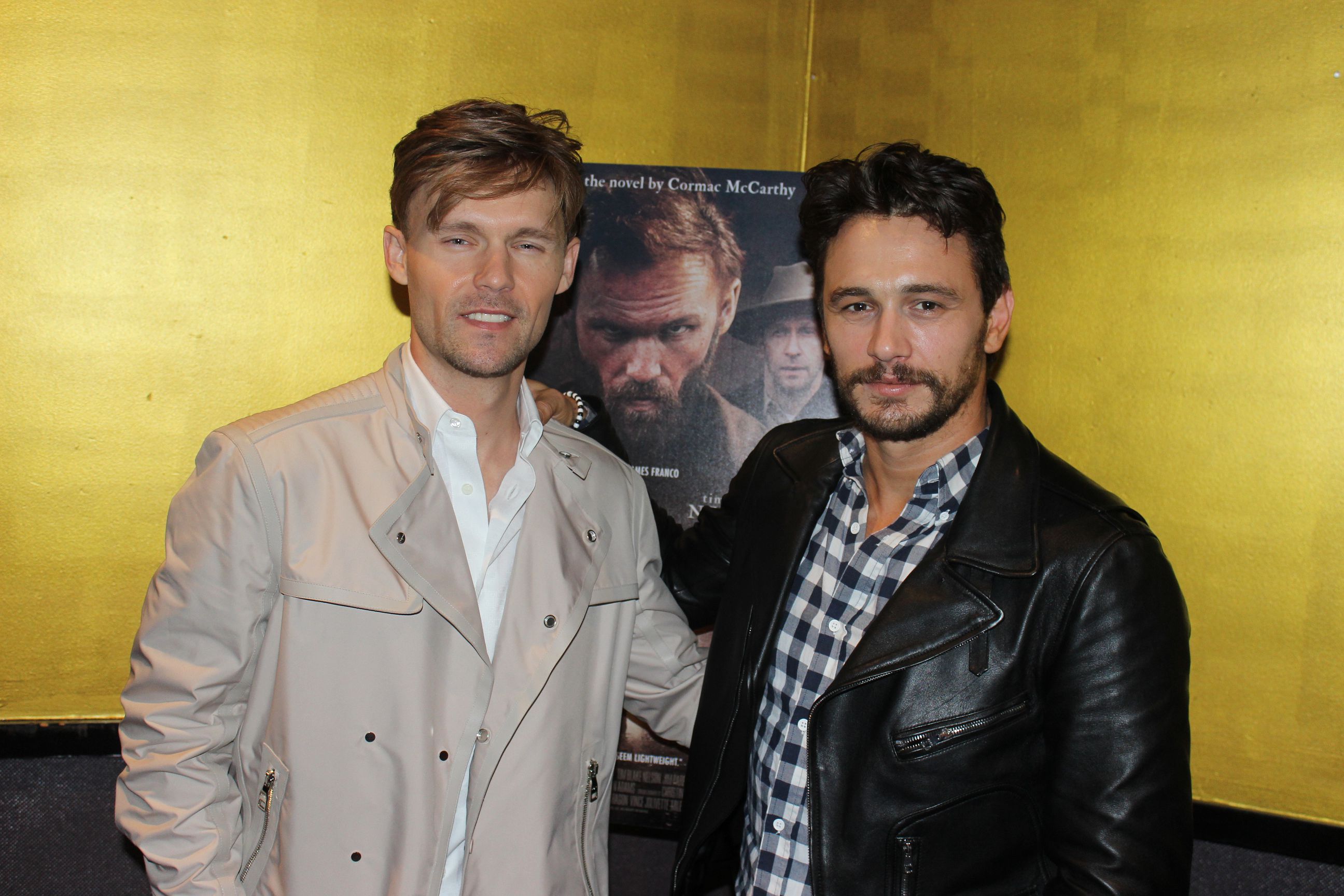 LocalBozo.com sat down with director James Franco and lead actor Scott Haze to discuss whether the pair had any trepidation in filming some of the more shocking scenes and straddling the line between staying true to Cormac McCarthy’s vision in “Child of God” the novel and depicting the harrowing scenes on film for viewers. Their answers have been transcribed below and may contain spoilers.

James Franco: We shot what was my favorite scene from the book- or the scene that you– sometimes as a director, you have a scene or a moment or something in your head that’s like the thing that just excites you about the project and for me it was that scene where he discovers the teenagers- not because I’m into necrophilia, but because it was such a beautifully sculpted scene that showed character development through behavior.  And I really loved that as a director and actor and writer. We shot that first- so the first day, Scott did that scene where he discovered the bodies and did all that stuff.  For me, when you have people around that you trust and you know on a certain level ‘this is make believe,’ you know– we’re not really harming anyone, we’re all friends together. And I’ve also learned that if you believe in something, then– if I believe in something I have no inhibitions. I’ve done art projects with Paul McCarthy where his dirty ass is like in my face, you know?  So I kind of feel like if I believe in something, then I’ll do anything.  And so, it didn’t feel hard to me at all– I was just directing. Scott may have a better answer for you- I didn’t actually do it.

Scott Haze:  I wrapped my head around it so much so where I would talk to people about the film and they’d say– even after we got done filming the movie– they’d say ‘Oh, you raped those girls.’ And I’d say ‘No, it was- it was his girlfriend.’  So I’d worked the whole situation out where a lot of the stuff people think it’s shocking, although a guy lives in a cave- in times of war, that’s where people lived. They lived in caves. It’s not like he wants to live in a cave because he wants to be bad ass. It’s more like that’s where you go for protection and safety. And maybe- I don’t know- if I was trapped in the woods for a long time and nobody was talking to me and I came across a beautiful girl who had just died…I don’t know. I’m just saying– I worked it out all in my head where nothing was like too shocking. There’s that scene obviously where he goes to the bathroom in the woods. Everyone’s like ‘Oh, you used a stick to wipe his ass,’ and I’m like ‘Well, that’s from the book.’ But it wasn’t too shocking for me. It was when I first read the novel and that’s when I said, ‘I have to go to Tennessee, because I have no idea what these guys are like.’  …The most shocking scene in the movie probably- [was] one that we didn’t shoot. That scene might have pushed it too far to where you lose the audience. I guess my perspective changed after meeting these people and getting to know people who were living in that time and the elders who had that accent and getting to experience– ‘that’s why you live in a cave. Why would you do these things?’ So I guess it changed as I got into it deeper.

“Child of God” starring Scott Haze and directed by James Franco is rated R, has a runtime of 104 minutes, and is in limited release on Friday, August 1st.