Summerland ’14 Turns Back the Clock at Irving Plaza 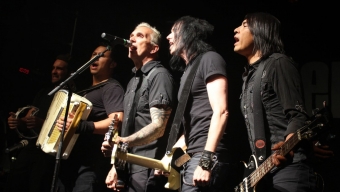 When we last left Everclear frontman Art Alexakis, we had just witnessed the inaugural “Summerland Tour” back in July of 2012, where a packed show at the not shuttered Roseland Ballroom featured the likes of Gin Blossoms, Lit, Marcy Playground and Sugar Ray. Though last year’s jaunt with Live, Filter and Sponge never touched upon City soil, with a revamped bill and more than thirty calendar dates slated into August, the 2014 Summerland Tour rolled into town on Tuesday night, taking over Irving Plaza in the process. Support this year would come in the form of late 90′s bands like Spacehog, Eve 6 and Soul Asylum, responsible for some of the most anthemic songs of the decade. And with Everclear once again holding down the headlining slot, fans were treated to a cornucopia of eclectic rock music- pop, punk and alternative- and a whole lot of nostalgia.

Though fans were still flocking into the venue just as the three members of Spacehog took the stage, the band quickly took hold of their attention. Despite just a six song opening set, upbeat tracks like “Mungo City” and “Cruel to Be Kind” were winners with the audience as brothers Antony and Royston Langdon played to their delight as if the clock had turned back to 1996. The arrival of set closer “In the Meantime” was met with a downright raucous response with the entire standing room crowd singing along to the track’s high pitched chorus. Spacehog’s roughly thirty minute set revealed a band that very much still has it together musically, evidenced by the lengthy ovation the band received as they headed offstage- which may have even caught the bandmates themselves a bit off-guard.

Similar to Spacehog, Eve 6 also sports a three piece band with the bass player as their frontman. And the arrival of the tall ginger-headed singer Max Collins to the stage yielded a similarly impressive response from the crowd who was all too excited to sing along to throwback tracks like “Think Twice” and “Promise.” The band’s seven song set opened with relatively new track “Victoria” from 2012′s “Speak in Code” and culminated in predictably rousing fashion with fans screaming ‘Tie me to the bedpost!’ as “Inside Out” closed the band’s abbreviated performance. It was “Here’s to the Night” though that had most of the fans in attendance waving their cellphones overhead, clearly trying to recapture much of the magic from their youth. The band’s performance was perfectly succinct, mostly fast-paced and laden with hit songs- just as you’d hope for on the Summerland Tour.

Interestingly, the turnover between bands moved very quickly and despite being the lead vocalist for the headliners, Alexakis would also play emcee for the evening, introducing each band and enjoying some playful banter with the crowd between sets. Soul Asylum was perhaps the most unique addition to the Summerland bill this year since their style and sound essentially predated the other three lineups. Beginning with punk roots, the band’s drastic departure toward alternative acoustic-rock on 1992′s “Grave Dancers Union” was a strike of genius and the resulting triple platinum album made Soul Asylum one of the most successful rock acts of the early 1990′s.

Fast forward more than two decades and the completely upside down world of the music industry has even veteran singer-songwriter Dave Pirner a bit confused- he indicated as much in his recent interview with LocalBozo.com. That said, as the band took center stage Pirner in person, though certainly a bit older, looks and sounds identical to the frumpy, grungy singer that sprang into our early 90′s consciousness donning his worn plaid shirts and scuffed up Converse shoes, seemingly caring very little about how we interpreted his appearance.

Whether ‘starting a factory that makes misery’ or heading the ‘wrong way on a one way track,’ Pirner has always seemed to find a voice within himself that is utterly relatable. That everyman presence on stage certainly seemed to resonate on this night as fans gobbled up every minute of the group’s performance, despite none of the songs being released after 1995. Pirner’s vocals were right on point as singles “Misery” and “Somebody to Shove” sandwiched iconic hits “Black Gold” and “Runaway Train” to the sheer delight of the jam packed room, which seemed most full during the band’s 40 minutes on stage.

Eve 6′s Max Collins was once again out to the stage- following a change of clothes of course- to introduce the evening’s headliners in Everclear. Emerging from the backstage area, the five members joined together at a sole microphone- with an accordion no less- and urged the crowd to sing along to “Santa Monica,” arguably the band’s biggest and perhaps poppiest hit. The brief singalong was but a tease, but certainly a fun precursor for what was to follow- a forty minute set rife with hits and tempo changes from fast to faster. Following an instrumental cut titled “El Distorto De Melodica,” Alexakis, the eternal teenager launched into longtime band favorite “Heroin Girl” as raw and rock-fueled as anything in the band’s catalog.

Alexakis will certainly never be mentioned in the same breaths as Chris Cornell or Eddie Vedder vocally, the music of Everclear is more about the enjoyment you take from it rather than the actual sound in a live setting. “Man Who Broke His Own Heart” was a catchy new track, enveloped by classic hits “Father of Mine” and “Wonderful” and the fans around the venue were singing along with their hands overhead as if they had just emerged from a trip back to 1997. The band capped out the three hour evening with staples “I Will Buy You A New Life” and a full-on band version of “Santa Monica” to close the feel good show in feel good fashion. Things weren’t necessarily better in the 1990′s, though the music certainly is more romanticized. And in that lies the true meaning behind the Summerland Tour, which is less a nostalgia money grab and more of an impetus for igniting the good feelings that you had when these songs made an impact- be it big or small- on your life as you were growing up.