Sevendust, Stripped Down and Acoustic at the Highline 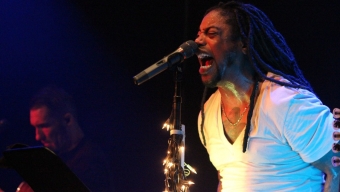 An Evening with Sevendust

It’s rarefied air for a typical heavy metal show to evoke tears from an audience. And even more rare for the frontman of said band to be equally as unable to control his own emotions. But there was nothing typical about Sunday night’s acoustic performance by Sevendust at New York City’s Highline Ballroom, evidenced by the constant flow of tears dripping from the eyes of singer Lajon Witherspoon which served as a physical show of appreciation to the fans which he considers his family. The fans that gave his band the ability to live out their dream. The same fans that filled the sold out Ballroom on this night.

Amplifiers normally stacked to the ceiling were replaced by music stands and wooden stools as the normally raucous rock show would be considerably toned down by the band, but certainly not by a rabid audience eagerly anticipating the five piece band’s arrival to their positions on stage. Touring on the heels of their recently released new fully acoustic record “Time Travelers & Bonfires,” on which Sevendust penned and recorded six new songs to accompany six other reworked versions of previously recorded heavy versions, fans have been gobbling up tickets at their shows at such a fast pace that the group is already beginning to book a third leg of this acoustic run. And after witnessing the spectacle of their 100 minute performance at the Highline, it’s not difficult to see why.

The band’s seventeen song set was broken up into two parts with a short intermission between them and provided a litany of memorable moments.  From the opening chords of “Trust,” Witherspoon and company were remarkably on point adding in some previously forgotten relics from their catalog like “Skeleton Song” alongside reworked versions of the frenetic “Rumble Fish” and among the band’s most successful singles “Denial,” both of which do not appear on the new album.  Yet it was the cuts from their new release that were among the show’s best moments. “Gone” from 2003′s “Seasons” and “Karma” from 2010′s “Cold Day Memory” were each brilliant departures from the originals, sandwiched by a masterful cover of Johnny Cash‘s version of “Hurt,” led by guitarist Clint Lowery on vocals- with the help of the entire standing room audience singing backup for good measure.  Between songs, Witherspoon would describe the emotion invested in the writing of each of them which made the entirety of the show feel like a supremely special, almost Storytellers-style performance in the midst of such intimacy.

Though Sevendust the band is surely about the collective, the acoustic setting allowed each member their moments to shine- be it on a Morgan Rose drum solo, guitarist John Connolly perched on his stool and harmonizing with his mates or bassist Vinny Hornsby, despite yielding the spotlight to the rest of the band, holding down each song with his walking fingers along his oversized strings. But it was hard to take your eyes off of Witherspoon whose connection with the audience at every show is undeniable. With or without the mic in his hand, he spent a good portion of the performance thanking the fans packed in toward the front of the house and touching each of their hands- a fitting show of gratitude for the loyal folks that have been trekking out to see the band perform time after time over the last fifteen plus years. The touching “Angel’s Son” and Sevendust’s very first single “Black” would close out the show in short order but not before the band soaked in every final bit of adulation from their family of supporters, all of them now clapping overhead, and giving praise to a ‘group of rednecks from Georgia’ who it seems, have grown up along with us after all these years.