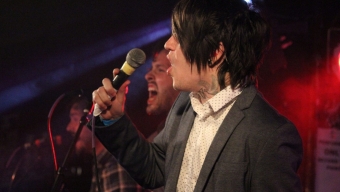 A LocalBozo.com Concert Review
The Studio at Webster Hall, New York, NY
May 5, 2014

It was a sweaty, sticky Cinco de Mayo inside of The Studio at Webster Hall on Monday night. On a particularly busy evening where hardcore band letlive. and James Blunt of “You’re Beautiful” fame had dueling shows inside of the same complex, support from Starset, 3 Years Hollow and Devour The Day had preceded the arrival in the basement of Nashville’s Framing Hanley. Arriving in New York City just days after the release of their new album “The Sum of Who We Are,” the band tore through a brief but effective 45 minute headlining set to the exaltation of the small, vocal crowd on hand.

Until previously, Framing Hanley had spent four years between album releases.  Their latest had been the result of a fan funded Kickstarter campaign which burdened them with the pressures of creating an album that was both up to their lofty standards and one that would do their audience justice. But their sincere appreciation was evident from the get go and as a repeated focus of their live set, they continually thanked the young fans on hand for having come out to the show.  In turn, the five piece emerged from backstage triumphantly to a hearty and sizable applause.  Though the band was certainly crowded in The Studio’s small space, the show began with particular vigor as the new single “Criminal” kicked off the evening with a fury and the crowd seemed entirely energized upon the group’s arrival.

Although the band’s cover of Lil’ Wayne’s “Lollipop” generated perhaps the best response from the live crowd, their newly written original material like the funky bass-led “Simple Life” and the pulverizingly fast “Collide” were particularly fun set additions from the new album. Leading the charge was vocalist and recent LocalBozo.com interviewee Kenneth Nixon, who is far more skilled a frontman than his years might imply. His up close and personal style brought him just inches from the faces of screaming fans in the front row, who served to fuel his enthusiasm while passionate harmonizing with his backing bandmates on stage particularly on tracks like “You Stupid Girl,” where it seemed he and his audience were nose to nose.

Following an abbreviated moment to catch their breath, the band returned on stage to close out the show with a particularly inspired version of “Hear Me Now” which had the entire place singing along at the top of their lungs, as guitarist Brandon Wootten screamed out the heavier-than-hell chorus. Though the band’s set was relatively short, room filled up by screaming twenty-somethings to celebrate the release of a new rock record was a refreshing sight, particularly here in New York City where the four-act bill served to showcase that rock music- especially for young fans- may have been prematurely pronounced dead.