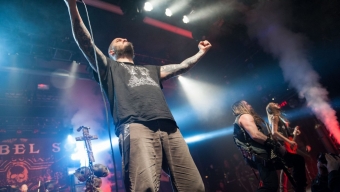 Black Label Society and Down

Saturday night’s metal show at a jam packed Best Buy Theater brought four heavy bands and some two thousand New York area fans together for a glimpse at the genre’s past, present and future. Headlined by Black Label Society, led by legendary modern guitarist and New Jersey native Zakk Wylde and New Orleans-formed supergroup Down, the bill was a relentlessly pounding affair throughout, leaving little room for fans to breathe between an onslaught of banging heads, surfing bodies and pulverizing riffs- all of which served to remind us of our affection for heavy metal. As if a reminder was necessary.

The night kicked off just right courtesy of Los Angeles, California’s Butcher Babies. While the band is predominantly women, don’t let their good looks fool you- these girls can throw down some screaming vocals. Pretty yet deadly, the band came out swinging with “I Smell a Massacre” from their debut album 2013′s “Goliath.” Led by songstresses, the red-headed Heidi Shepherd and the raven-haired Carla Harvey, the pair jumped around on stage like crazy, screaming to every lyric. The crowd, to their credit- some of whom were familiar with the band’s set- were singing along to tracks like “The Mirror Never Lies” and “Goliath” before capping off a blistering opening set with their first single “Magnolia Blvd,” which served to further rev up an already excited audience.

Following suit were some fellow Los Angelinos from Devil You Know, a supergroup of sorts made up of former members of Fear Factory, All Shall Perish and led by former Killswitch Engage frontman Howard Jones. Kicking off with “A New Beginning,” the band’s seven song set, though abbreviated, had a good chunk of fans in the front row really feeling the music evidenced by a sea of head banging and rocker horns thrown overhead. Tracks like “Embracing the Torture” and “The Killer” were particularly on point, thrashing the appreciative crowd with particular vigor. Touring on the heels of their first release “The Beauty of Destruction” which dropped in April, the band quickly gained the support of the audience, closing out with the fast paced “Shut It Down” to end their brief but effective run on stage.

Concert Review: Down at Best Buy

The crowd was noticeably jacked up by the time lead vocalist Phil Anselmo (formerly of Pantera) and the rest of Down was slated to take the stage. Upon the band’s visibility, the entire room began chanting ‘Phil, Phil, Phil,’ and the crowd exploded in an uproar as Anselmo himself arrived. The band launched into “Eyes of the South” and Anselmo began headbanging like crazy which further fueled the electric crowd. Tracks like “We Knew Him Well” and a rowdy version of “Witchtripper” somehow managed to encourage even more crowdsurfing amid cheers of raucous excitement amongst the standing room faithful.

Though Down had originally formed as a supergroup side-project of sorts releasing their first album back in 1995, the former members of Corrosion of Conformity, Pantera and Crowbar, have become a full-on entity, releasing two subsequent full length albums and two EP’s over the past two decades. Despite their frontman’s deep bellowing voice and tough guy persona, he manages never to take himself too seriously in the midst of a live setting. During “Lifer,” the first single from 1995′s “NOLA,” he addressed the crowd- “I know some lifers right up there in VIP. Fuck you guys!” and proceeded to give them the finger and his adoring fans all collectively followed suit, erupting in laughter. And although longtime drummer Jimmy Bower‘s drum peddle was damaged in the fray of “Losing All” – to which Anselmo mused “Really dude you had to break it now? Are we fucked guys? I guess we play acoustically. That would be awesome and different” – Down closed their nine song set with outstanding versions of the infectious “Stone the Crow” and “Bury Me in Smoke” seemingly leaving the crowd with just a little bit left for the evening’s headlining act. Or so we thought.

In anticipation of the arrival of Black Label Society, a massive black flag was raised in front of the stage only to fall to the floor, revealing the band’s iconic bearded guitarist Zakk Wylde wielding his signature spiral guitar. The room subsequently became a complete frenzy as the band opened with “My Dying Time” and with each passing lyric reverberating from the mouths of the audience- Wylde, who also fronts the band would don a bigger ear to ear grin. Songs like “Godspeed Hell Bound,” “Heart of Darkness” and “Damn the Flood” were particularly ruthless- all of which was a precursor to Wylde’s unparalleled guitar solo, showing off his breathtaking virtuoso skills to the crowd. The appearance of a grand piano was a nice surprise for the song “In This River,” leaving much of the room to marvel at Wylde’s musical chops. But the arrival of Anselmo back to the stage for the show’s fitting closer, a cover of Pantera’s “I’m Broken” was without question the most memorable portion of the performance. Led by two iconic musicians from two of the most renowned bands in the history of heavy metal, fans were utterly awestruck by the incredible sight in front of them. And the two men were seemingly enjoying it just as much as the two thousand fans in front of them- cheering at the very top of their lungs from start to finish.