No Stopping Alter Bridge at a Sold Out Best Buy Theater 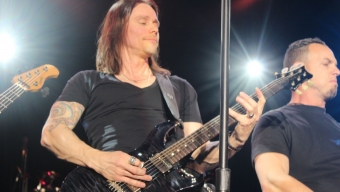 You would be hard pressed to find a group of harder working musicians than the talented guys in Alter Bridge. Be it splitting time between solo or side projects, performing together or alternating between tours with Creed or with Slash, the band just seems to constantly be out on the road touring. Perhaps it’s that sense of selflessness, which allows each member to explore their own creative outlets, that made Thursday night’s sold out show at the Best Buy Theater so genuinely inspired. And perhaps that’s why despite their months apart, Alter Bridge is a band that can quickly put the pieces back together, write and record a killer new record every few years and not miss a single beat on stage as one of rock music’s finest and most cohesive touring entities.

Any fan that’s attended a live Alter Bridge show will surely attest to the many moving pieces throughout each performance- and Thursday’s 100 minute set was certainly no different. Fronted by the extraordinarily talented vocals of Myles Kennedy and lead guitar virtuoso Mark Tremonti, the pair’s versatile skillset is such that either one would more than capably hold their own- Kennedy as a guitarist and Tremonti as a frontman- in different bands. But with Alter Bridge, their talents work best collectively and their no frills stage show exemplifies the kind of musicianship that die hard rock fans can salivate over.

With the release of “Fortress” in the fall, the band’s fourth studio effort, you’d think much of the set would be dedicated to performing new material. But despite the riff-rocking opener “Addicted to Pain” and the hauntingly fast new single “Cry of Achilles” early on, much of the show would revolve around their earlier material. Songs like “Brand New Start” and “Ghost of Days Gone By” served to showcase Kennedy’s unparalleled range at an extent of high pitch where he has no true equal. Tremonti meanwhile, vastly underrated as an axeman, stood perched for much of the show, pounding his six strings with masterful precision on “Ties That Bind,” “Before Tomorrow Comes” and actually took over lead vocals on “Waters Rising,” which ranked among the show’s best moments.

Alter Bridge saved the bulk of their hits for the end of the set, which allowed the older skewing audience to focus on the music rather than sing along to the hits. But when said opportunities came, the fans enthusiastically embraced them. The chorus-filled “Broken Wings” had much of the room singing at the very top of their lungs, while the appropriately titled “Metalingus” saw a full sea of bobbing heads around the general admission space. Main set closer “Open Your Eyes” was the band’s first hit single and despite being potentially their catchiest and most well known, it was the show’s closer “Rise Today” that served to truly unify the four members of Alter Bridge with their more than two thousand animated New York City fans, who have proven time and again, their undying support for these musicians, regardless of who they are on tour with.