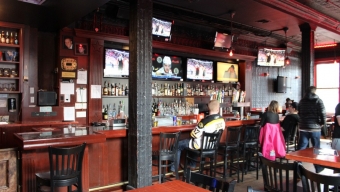 It wasn’t all that long ago that we crowned Greenpoint’s Red Star as makers of the ‘Best Wings in Brooklyn’ as part of LocalBozo.com’s “Brooklyn Wing Bowl.” So take this piece with a bit of a grain of salt as you read forward. I like Red Star. I like it a lot. The massively spacious tri-level haunt should be routinely mentioned in any conversation of the City’s best sports bar and for some reason it isn’t. For that reason, I consider the place my not so little secret.

Candidly, as you might assume, I don’t make it out to Greenpoint nearly enough as I should, which my raving reviews along my most recent journey probably indicate. But every trip out there reinforces my love for Williamsburg’s often unheralded and underutilized sister. Red Star, the bar, formerly hosted its very own ‘Best Wings in Brooklyn’ competition annually, a competition which to my dismay has been discontinued. But the place’s exceptional (really exceptional) “Raspberry BBQ” and their “Garlic Wings” (each $13 per dozen) are absolutely awesome and are worth going out of your way to sample.

Wings aside, Red Star is an excellent bar to frequent on gameday. The walls are adorned with sports memorabilia, most of which you’ll notice after your first three or so visits. There’s also a mini-arcade- don’t get any ideas and bring your kids or anything- but it’s conducive to packs of friends that like sports bars but not necessarily sports. There isn’t any pretension on the beer list here either, with their own Red Star Dark Lager being the signature on tap and the Sixpoint Sweetaction being the closest to a craft style in the house. Make no mistake, this isn’t a place where you linger and sip upon some vanilla porter or some rare IPA- you come to Red Star to throw back a couple and enjoy values like $1 sliders and $3 domestic beers on Mondays, 50 cent wings on Wednesdays and Thursday Hockey Nights with specials for anyone rocking their long sleeve jerseys. Leave the Devils’ ones at home though.

Bar Type - A three floor sports bar that also poses as a mini concert and event space and home to some of the best wings in New York City.

When to Visit â€“ You can’t beat their Happy Hour specials, but Saturday or Sunday afternoons are ideal. Just don’t make plans for later in the day- you won’t want to leave.

Value - Don’t miss the Happy Hour deals at Red Star- $3 brews on Mondays, $1 Taco Tuesdays, and 50 cent Wings on Wednesdays- there’s specials all the time at Red Star. Leave your snooty attitude at the door and drink some of this domestic swill for a change.

The Lowdown – If you want to talk about great sports bars, Red Star deserves to be in the conversation. Gamedays are perpetually packed and frankly, there’s not a similar place that can hold a candle to the Star in Greenpoint or in Williamsburg. And you’d have a hard time convincing me of a better spot in Manhattan. At the very least, do us a favor and head over to taste the Wings. Whether you’re down the block or down the subway line, it’s a trip that’s absolutely worthwhile.