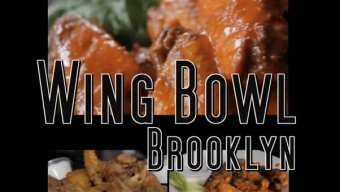 LocalBozo.com has taken you to the brink and back. First, we traveled to the Upper West Side for the first of its kind- the Wing Off! Then we headed downtown to the West Village to enter the battle dome for a hard fought, Wing War. When we left you last, it was a good ‘ol fashioned Wing Down in the hard partying East Village. And with the Super Bowl just a few days away, it’s time to bring you across the river to Brooklyn for some grid-iron gluttony. That’s right, it’s the Wing Bowl! Set your men up on the line, and we don’t want to see any unnecessary blue cheesing!Â

Any football fan will tell you that getting the ball first and putting some points on the board gets your team off to a great start. The Wing Bowl equivalent of that is kicking the day off with some solid chicken wings at a great joint. Our first stop took us to 200 Fifth in Park Slope, Brooklyn. Are you ready for a Wing Bowl?

200 Fifth is a football mecca and has received truckloads of local press to prove it. The massive Park Slope half restaurant/all sports bar oozes game day fun. On any given Sunday football fans must arrive early in order to grab a spot at the bar, or at one of the many tables, each of which provide visibility of the large HD TVs. The walls of this place are literally covered in TVs so even if you arrive late and are forced to stand in the middle of the bar, you can still get a great view of the action. When you think of a New York sports bar, 200 Fifth hits the spot, but on this Sunday the LocalBozo crew was here for one purpose only: the wings.

After ponying up to the long wooden bar, a steaming stack of medium spiced wings arrived. Upon first glance the twelve wings appeared to be evenly sauced and uniform. Two blue cheese containers were provided which is always appreciated, as whenever you have more than eight wings, you will usually go through two of them. The first wing sampled was a drumstick which was covered yet not dripping, in a standard buffalo sauce with a medium spice. It was meaty and tangy, yielding an even flavor throughout. The blue cheese was thick and creamy, and clearly was not derived from a large barrel of dressing purchased in bulk. After consuming the entire plate, these would best be described as traditional “pub wings.” These wings should be enjoyed along with a pint of easy drinking, light domestic beer like a Coors or Miller Lite.

Once the last wing was tackled we wet-napped our fingers and headed for the train. The next stop was Williamsburg’s Mullholland’s on hard partying Grand Street. Mullholland’s fits like a glove on the block, surrounded by like minded bars where the goal is to have a great time. The bar itself is ideal for an afterwork drink, a weekend night out, and or a stomping ground for big sports games. The large bar is surrounded by high-top tables, as well as comfortable seating options in the back next to a working fireplace (great touch). The TV screens are huge, and well spaced throughout the joint. But hey, we’re not here to give you an architectural layout of Mullholland’s. No, the LocalBozo team is here to give you a play-by-play of the wings!

We walked into Mullholland’s knowing their wings were renowned city wide. That knowledge alone adds a ton pressure for these sauced chicken segments to exist on another level of greatness. Luckily there was beer around to keep our palates and opinions in check. After placing the order we chatted with some of the bar staff and discovered that each wing is tossed in a homemade sauce and dry rub like most wings of it’s ilk. But from there Mullholland’s ups the ante. To our surprise, the meticulously sauced and seasoned wings are baked, then fried. Having never tasted such a preparation, we looked forward with anticipation as the wings arrived at our table.

Just as the wings were set down you could tell their innovative cooking style paid off. The scent that was coming off these babies made us dig in right away. After a dip in some very chunky blue cheese, we took the first bite. The meat literally fell right off the bone. Be it a drumstick or a wing, these puppies were tender. Because of the cooking style the wings were not crunchy which one would usually expect, but that wasn’t a problem whatsoever. The sauce mixed with the well cooked chicken making the wings at Mullholland’s savory and most important, memorable.

If variety is the spice of life, then Greenpoint’s Red Star embodies that sentiment. After a quick walk from the the G train, we arrived at the corner bar housed in what appears to be a former warehouse space in an industrial section of Brooklyn. To call Red Star big would be an understatement because this place is downright huge. The sports bar boasts two floors with tall ceilings, making this a roomy joint with a ton of space to move around and enjoy a game and/or event. And speaking of events, Red Star is the home to the “Best Wings In Brooklyn Competition” held annually throughout the facility (The free event is returning on February 25th).

Not only did Red Star host last year’s event celebrating Brooklyn’s finest wings, but they were also a front-running participant, offering up one of the event’s favorite wings. The competition was fierce, pitting them against some of the very best Brooklyn had to offer, including Mulholland’s. Red Star’s 2011 entry was a raspberry BBQ style wing, which in the world of wings, was unorthodox to say the least. Therefore, we knew that’s exactly what we would have to sample in order to crown LocalBozo.com’s own champion of Wing Bowl. To make it fair, we ordered up two other wing styles to balance the tastes that we had sampled to that point. So we ordered a plates of traditional Buffalo style, and garlic, as our wildcard selection.

All three wing selections arrived at the same time. It was a true “Wing Bowl Triple Play.” And much like a fish to water, we went for the raspberry BBQ wings first. Each wing was covered in a thick raspberry/BBQ sauce infusion, making them sticky to the touch. Covered with sesame seeds, the first impression was a solid crunch of skin, coupled with an even mixture of flavors. Somehow the raspberry and BBQ sauces did not fight each other on my palate. Instead, they worked together to produce a taste that was both unique and satisfying. After several hearty and well deserved cleansing gulps of beer, we moved onto the garlic wings. As stated in the video, garlic if overused can produce harsh flavors and terrible breath. That didn’t occur here. Instead what we tasted was a mellowed garlic flavor, mixed with the juiciness of a fried wing. It was finally time to sample the Buffalo style for our “fourth quarter.” Before the wings reached our table, they were marinated in sauce and dry rubbed. With each bite into the plump drumstick, these factors became immediately apparent. Mild spiced and meaty, even the traditional wings here were worth our journey to Greenpoint.

THE RESULTS ARE IN!

This was hands down the toughest “Best Wings In NYC” competition for our staff to judge. Brooklyn is making a name for itself in all areas of city culture, and this seemingly includes the home of Buffalo wings. The LocalBozo crew took you to three of the most popular neighborhood bars in Brooklyn and they all impressed us with their overall atmosphere, brew selections, and different styles of wings. So without further ado, let’s break it all down. First, we hit 200 Fifth in Park Slope. They prepared a well sauced, pub style wing that paired perfect with lite brews. Next, Mullholland’s of Williamsburg knocked our cleats off with a wing that was both baked and fried. It was soft but savory, with meat that fell right off of the bone. Damn good! Finally, we tried three insanely flavorful wings at Red Star, including the award winning raspberry BBQ. After the wet-naps were tossed and our hands were clean, we were ready to crown the winner of LocalBozo.com’s Brooklyn Wing Bowl: Red Star!Â  The raspberry BBQ wings put us in awe. The sauce combination baffled us. The garlic and Buffalo varieties backed it all up, showing that Red Star can work a variety within each flavor, scoring several extra points. In the end we loved all three bars, and they all deserve your patronage. So if you live in Manhattan get on the train, and if you reside in Brooklyn, seriously what are you waiting for? Enjoy the game, Go Giants!

You can check out more of LocalBozo.com’s “Best Buffalo Wings in NYC Series” below:

- Best Buffalo Wings in NYC: The Upper West Side Wing Off

- Best Buffalo Wings in NYC: The East Village Wing Down