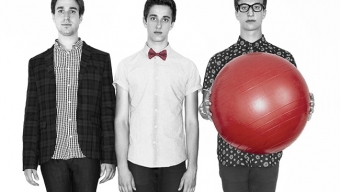 Go ahead. You’re better off going to YouTube before we begin and listening to “I’m Ready,“ the debut single from New York City’s own AJR before we begin. We’ll wait.

Formed by three brothers- Adam (23), Ryan (19) and Jack (16) Met- AJR began harmonizing together in local parks, namely Central and Washington Square, performing cover tunes and eventually some of their own material. Fast forward some eight years later and the band, without a record label or so much as even some guidance from those in the ‘biz,’ have dropped their debut EP entitled “6foot1.” The group’s aforementioned single is gaining some serious traction at Satellite Radio and is creeping toward terrestrial airwaves on pop stations. Considering that much of the band’s inspiration comes from Manhattan and that Wednesday February 19th’s sold out opening slot for The Vamps at Gramercy Theatre is the band’s most important show to date,  they are without question an ideal fit for the confines of our website. And they’ve got a unique path to stardom that reads like a storybook fantasy.

Whatever earnings the brothers were able to take from street performing were parlayed into musical instruments and subsequently, recording equipment. Their parents’ living room was then turned into a makeshift recording studio and editing room where the full recording of the EP would take place. With their lead single cut and ready to be unleashed, Ryan began tweeting an early version out to a bevy of celebrities- one of whom, songstress Sia, was so impressed that she went out of her way to meet the brothers in person and was instantly impressed. From there, the band churned out a heavily New York centric lyric video for the track along with a fine-tuned music video that’s helped the band become a Myspace ‘One to Watch’ in February and iHeartRadio’s ‘Artist of the Month’ for Top 40 music. AJR’s success certainly seems to be spit-balling from there with a full length album in the works as well as a headlining tour- including a stop right here in New York City, back at Gramercy Theatre on March 15th.

LocalBozo.com grabbed a few choice minutes with AJR’s elder statesman Adam Met, the group’s 23 year old bassist who also blends vocals with his brethren. Listen in as we discuss AJR’s DIY approach to creating music and growing their brand, his excitement for their upcoming shows in New York, other familial bands being used as a template for pop music success and some of his favorite haunts in New York City. The Columbia grad also talks some interesting facts that the band’s fans might not know along with what’s coming up from AJR later this year. For more information on AJR and the band’s inspiring backstory, check out ajrbrothers.com.