Scott Weiland’s Still Got It at City Winery 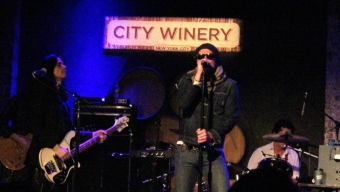 “How ya’ll doing? How’s your steak? How’s your lobster?” Amid candlelit tables with an audience of folks dining all around him, TriBeCa bar, restaurant and concert venue City Winery welcomed in one of rock’s most established frontmen on Tuesday night. For just over an hour, former Stone Temple Pilots and Velvet Revolver frontman Scott Weiland rocked the small stage in front of a seated crowd that assembled for a glimpse of the showmanship and the stage presence that made Weiland one of the more memorable and legendary frontmen of the past two decades.

Performing a mixed bag of old STP songs mixed with some of his solo material old and new, Weiland confidently strode out to the small stage front, backed by the same pyramid of oak wine barrels that set the casual setting inside of the Winery. The slender Weiland, in true rock star fashion appeared in a wool cap and sunglasses, rocking a jean jacket layered over his black vest and skinny black tie- an ensemble that mixed the more refined atmosphere of the venue with just a remaining tinge of rock and roll. But even during the most rocking moments, the performance was very much laid back, likely a result from the seated crowd being served food and drinks from a waitstaff throughout the evening- much as you’d expect to find inside of any local comedy club. Mused the rocker, “I feel like we’re on a mountaintop chalet, don’t you?”

Some of the crowd around me seemed a bit surprised that Weiland was no longer working with Stone Temple Pilots and that he’d be performing a good deal of solo material during his set. Considering the catalog that the frontman has compiled with his two wildly successful groups, it is certainly an oddity that he’s less inclined to perform more of his hit songs. But it’s his prerogative that’s led him to this point and these solo shows certainly allow Weiland to express his artistic side, which is both good and bad depending upon how one decides to experience this show. But whether or not you are a fan of his more recent releases, Weiland’s talents are never in question. His stage presence rivals the most talented performers from any decade and comparisons to the likes of Bowie, Mercury and Jagger, while unlikely, aren’t unheardof. And as a singer, Weiland never appears to struggle to hit or hold any of the notes that he originally created some twenty years ago- evidenced by the likes of “Crackerman” which appeared early in the set.

New songs like “Fuck Forever” and “Circles” were passable, met with a genuinely appreciative reception, but the audience was waiting on more familiar material to satiate their rock fueled appetites. “Do It For the Kids” was the lone Velvet Revolver track included in the set, a particularly passionate but not overly defiant take on the typically fast paced number and fans seemed to really get excited for “Barbarella,” from 1998′s solo debut “12 Bar Blues,” performed with a nice acapella portion as the song neared its conclusion. Things turned psychadelic momentarily as the band played “California,” which also brought out a much welcomed subsequent tease of Jane’s Addiction’s “Mountain Song.” But as expected, legendary STP tracks like the megaphone-led “Dead and Bloated” and main set closer “Vasoline” brought a relaxed crowd to its knees. By the time the band had returned for their encore of “Unglued,” the folks standing in the general admission sections had begun a makeshift dance party and the rest of the room was alternating between snapping photos and bobbing their collective heads. And the sold out show proved that regardless of how long he’s been out of the limelight, time has not forgotten one of rock’s most iconic modern frontmen, even if he’s shifted focus some, from the music that’s made him so memorable.