P!nk Rocks The Rock in Newark 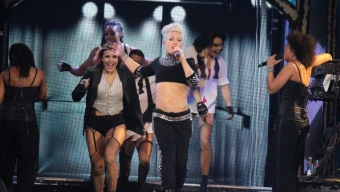 When P!nk released her solo debut “Can’t Take Me Home” in the spring of 2000, she seemed to be just another flavor of the month- a run of the mill R&B artist, with funky colored hair and a dazzling voice. Little did we know then that the fiery pint sized Alecia Moore with the larger than life voice would emerge to become one of the most popular pop artists of the next decade, evidenced by her latest in a string of sold out arena performances both domestic and internationally. Following up two area shows at Brooklyn’s Barclays Center, P!nk brought her wildly entertaining “The Truth About Love Tour” to a sold out Prudential Center in nearby Newark, New Jersey on Wednesday night in a two hour hodgepodge of visuals that mixed equal parts sex, performance art, and pyrotechnics as an effective backdrop for much of P!nk’s popular catalog.

Show openers The Hives set the table for P!nk’s arrival with a straight forward, no nonsense rock set- maybe a bit out of place in front of this specific audience, but quite good nonetheless. In anticipation of the elaborate stage show, a massive blue curtain was draped over one side of the arena as the audience awaited their first glimpse of the pop star. Catapulting high overhead where she would acrobatically remain for much of the evening, the show got off to a raucous start as the curtain fell to the floor amid the rousing crowd-pleaser “Raise Your Glass,” which would feature P!nk dangling from an orb high above the stage.

Two large video boards sandwiched the giant stage display, which was essentially a psychedelic S&M carnival surrounded by flashing lights that acted as a metaphor for the singer’s combination of unsubdued sexuality and ability to have fun. And it was evident through and through that P!nk was certainly having fun throughout this romp of a performance.  Possessing one of the most recognizable and gifted voices of any musical era, her vocals were never in question, although she did decide to pick and choose which portions of her songs that she would sing and which she would allow the crowd to consume on their own. Tracks like “Just Like a Pill” and “U + Ur Hand” provided the defiant sort of rallying cry that’s become the silent lynchpin between P!nk and her many young female fans and became an empowering back to back ensemble that showcased her unparalleled dedication to showmanship. She parachuted once again overhead, twisting and turning relentlessly during “Try.” She revealed an overt sexuality during a cover of Chris Isaak’s “Wicked Game.” She made the crowd explode for the stirring “Just Give Me a Reason,” featuring fun. frontman Nate Ruess‘ portion on the stage’s video board behind her.  All of these elements exemplified just how far P!nk has come artistically and how evolved she has become as an entertainer.

Between wardrobe changes offstage, her backing dancers and aerial artists captivated the live crowd, who couldn’t help but be entertained from start to finish. And following a short acoustic set featuring “Who Knew” and “Fucking Perfect” that allowed P!nk’s wonderful vocal range to be marveled, it was nice to see her turn back the clock for a three song medley from her R&B days as her dance troupe joined her on stage for “Most Girls,” “There You Go,” and “You Make Me Sick,” all in a row. Fittingly, the show would close with a phenomenal version of “So What” that saw P!nk suspended in mid air throughout the song, floating from the stage to the very back of the arena overhead and descending down upon the crowd seated on the floor just slightly out of their reach. As close as she seemed to us, despite our best efforts with our arms stretched out we couldn’t touch her- a fine metaphor for a performance artist whose live stage show and incomparable vocals are simply untouchable.