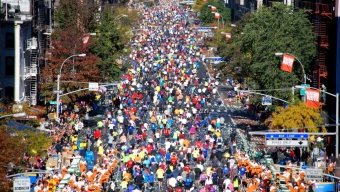 Sports
Friday, November 1st – Sunday, November 3rd – What a sports weekend in New York City and it gets started on Friday night in Brooklyn. The Nets welcome in the World Champion Miami Heat to the Barclays Center for an early season matchup of eastern conference heavyweights. Can Pierce and Garnett hold it down in Brooklyn against LeBron, Bosh and Wade? Meanwhile, all of the three local hockey teams are in action AND in town. And each game kicks off at 7pm. Locally, the Rangers take on the Hurricanes, the Islanders battle the Bruins on the Island, and the Devils host the Flyers. Sunday, the Knicks host the Timberwolves in an exciting matchup at the Garden, but the highlight of the weekend is in Jersey as the Jets play host to the New Orleans Saints. The schedule doesn’t get much easier and it starts this weekend for Gang Green.

Music & Entertainment
Friday, November 1st – Quiet night in tonight? Check out the movies opening this weekend. DeNiro. Douglas. Freeman. Kline. It’s a bachelor party for the elder statesmen that winds up being much funnier than it had any right to be. It’s “Last Vegas” (PG-13) and although your parents will definitely enjoy it, so will you. You know, if for some reason you’re going to the movies tonight. Also, “Free Birds” (PG) which rolls in 3D with Woody Harrelson and Owen Wilson. And George Takei, which is awesome.

Friday, November 1st – Saturday, November 2nd – November kicks off with some great live music. Friday night M.I.A. begins a two night stint at Terminal 5 while Ed Sheeran continues a multi-night residency at Madison Square Garden. Tickets are scarce for both so good luck in trying to procure them. Saturday, hop hop comes to the Barclays Center for Power 105.1′s “Powerhouse 2013″ show. Join 2 Chainz, Kendrick Lamar, Fabolous and more for a night of rap, blunts, 40′s, and whatever else people sing about.

Food and Drink
Saturday, November 2nd – For two and a half hours, you can head to Sakagura in midtown for The Sake All Stars. Meet and greet some of the biggest names in the sake game straight from Japan to New York City. Participants include Tentaka, Masumi, Hoyo, Hakkaisan, Kaiun and more. Served hot or cold, it matters not much- it’s tasty and get gets you all kinds of smushed up. Whether you head out at 6pm or at 9pm, you’ll taste unlimited sake, delicious appetizers, and meet some sake big wigs from Japanese breweries. And there’s a 17% discount for you to act now.

Saturday, November 2nd – If you’ve got $25, you can afford the NYC Homebrewers’ Guild 25th Anniversary Party. Some of NYC’s finest masters of suds have been crafting their craft beers for years and are ready to show it off. All of the proceeds will go toward the NYC Coalition Against Hunger, so the cause is a fine one. But it’s at Brooklyn Brewery, it starts at 9pm, and it’s a great way to spend Saturday night.

Other
Sunday, November 3rd – Stretch those hammies. Lace em up. It’s time for the 2013 New York City Marathon. More than 40,000 runners will tackle 26.2 miles of New York City roadway for an afternoon unlike any other. Head out to First Avenue on the Upper East Side to cheer on anyone crazy enough to do what you wish you could do- you slob. Cheer for sports.