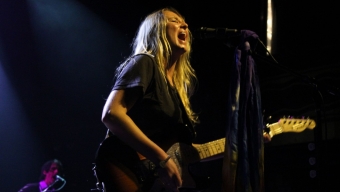 Recently turned 30 year old singer/songwriter Lissie seems to get many favorable comparisons to music’s past and present. With a deep rock voice that resembles Stevie Nicks, the rasp of Janis Joplin and looks like Jewel, it’s a minor miracle that Lissie’s been able to step outside of labels and carve out a musicianship all her own. Monday night, the blonde frontwoman and her band led a packed Webster Hall through a 75 minute romp that showcased the singer’s skills on both the guitar and on the mic cheered on by an allegiance of rock faithful.

The group’s 17 song set truly lent itself to illuminate the singer’s unique talents beside a group of equally skilled performers. With a bass guitarist seated at his own makeshift drumkit, pounding on the kickdrum between laying down the backing basslines, there was plenty to distract the live crowd from the female focal point on stage. That is, until she began singing and fans were treated to the sort of unparalleled vocals that simply don’t come along all that often. And as she was belting out song after song, you couldn’t help but marveling at her incredible talents.

Fresh off the release of the group’s sophomore effort “Back to Forever” in early October, Lissie compiled a setlist comprised of a good chunk of the band’s two records- replete with a few covers thrown in for good measure. Definitively poppy, the band’s sound pulls in pieces of history for good measure- equal beats of bluesy soul and rock that replicates some familiarity for the listener but somehow brings forth a totally new experience. The frontwoman wasted little time getting going, opening with “Bully” and into a fiery rendition of “Record Collector” to start the show with particular vigor. Their latest single “Sleepwalking” would follow in short order, with much of the crowd being unable to contain their excitement as the blonde singer confidently stomped in place, with her rhythm guitar beside her.

Thanking fans for coming out on a Monday evening seemed of little relevance to the standing room floor, who hollered out their favorite songs for the songstress to perform- some even after she had played them. But the up tempo “Don’t Wanna Go To Work” was particularly inspired on this night, with the crowd chanting along in agreement at the prospects of the day that would follow. The previously unreleased “Shroud” proved to be among the show’s most notable moments as the singer teased at an eventual release of the slower, catchier number at some point in the undefined future- but it was “Further Away (Romance Police)” that was truly mesmerizing. Having performed the song on TBS’ “Conan” show just a week prior, the song encapsulates everything that is so breathtaking about Lissie and her mates- the jolting fast paced guitar breakdown that reveals more of a rock edge than had been uncovered to that point in the show- and the singer’s uncanny ability to reach high notes vocally, before digging down deep, and hitting them again- this time longer and higher than you’d ever expect. If you think we’re exaggerating, take a look at Conan O’Brien‘s incredulous reaction following the band’s performance on his show.

In a fun surprise, the band ripped through a cover of Drake’s “Hold On, We’re Going Home” slowed down momentarily so that the crowd could both recognize and sing along to the track before being ultimately sped up into a raucous rock performance that allowed Lissie to make it their own. The band wasn’t done there though as Kid Cudi’s “Pursuit of Happiness” would close the show out following a brief offstage respite as the show closing encore. While there is certainly no shortage of female voices in every genre today, rock music simply doesn’t have one that’s anything like Lissie. And as fantastic as she is vocally, she’s equally as humble on stage which makes heading out to a Lissie show all the more refreshing. There aren’t any laser light shows or pyrotechnics. It’s just the singer, her guitar, and her band on stage and the music that she creates with an amazing voice that is absolutely riveting.