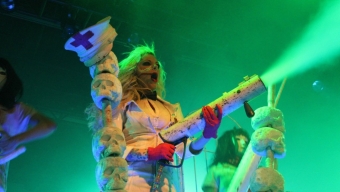 Concert Review: In This Moment at Best Buy Theater

Theatrics has been so ingrained in the fabric of live music over the past forty or so years that some acts often border on performance art. From the devilish Alice Cooper to the now laughable Broadway-esque qualities of a Dennis DeYoung-led Styx, some acts utilize subtle nuances while others shoot for that blockbuster show that’s often more style than substance. Albany New York’s In This Moment opened Hell’s Gate on Sunday night with a pulverizing metal show at the Best Buy Theater that coupled a flashy stage show with a rocking 75 minute set that through and through made sure that every eye in the audience was firmly planted on front woman Maria Brink.

Upon entering the venue, the stage setup revealed that this would not be just another rock show. With smoke filled cannons positioned on both sides of the marble statuette in front of the stage- one made up of skulls and reaching arms and hands in a final attempt to save their lives- near two open gates representing either heaven or hell- or perhaps some semblance of both, the small but vocal crowd appeared ready for anything to happen during the show. And anything did- with two masked female dancers gyrating on either side of Brink, smearing blood on their necks and their nurses outfits while dangling massive syringes that pointed out toward the crowd, while thick fog covered the entirety of the stage.

Her bandmates were out to the stage first- donning masks and layers of doom filled makeup in terrifying fashion- stepping up to their separate podiums awaiting the singer’s arrival. With long blonde curls extending out from under her hat, Brink arrived to the stage in full Nutcracker regalia, wearing her microphone as an earpiece. It would be the first of multiple costume changes throughout the show as she’d change seemingly after each and every song. The band’s set meanwhile seemed to effectively couple a metal show with a sultry burlesque as Brink sensually danced to each song while belting out her trademark screams to the awe of the males in the crowd and to the delight of the female metal heads front and center following suit.

The five piece tore through their 12 song set, heading to the stage during the haunting calls of “Rise With Me,” before opening with the obliterating “Adrenalize,” with absolutely head pounding drum smashes and the kind of heavy guitar rock riffs that would immediately convert any nonbeliever into immediate fandom. In This Moment focused primarily on material from 2012′s “Blood” but they also turned back the clock to 2007′s debut “Beautiful Tragedy” for a medley of sorts featuring “Prayers,” “Next Life,” and “Daddy’s Fallen Angel,” each of which was louder and faster than the previous track. Noticeably absent for these ears was the title track “Beautiful Tragedy” which was a bit disappointing, but the group’s cover of legendary Nine Inch Nails single “Closer,” was inspired and fun, if not all that dissimilar to the original.

It was hard to find too many flaws in the group’s live performance aside from the fact that we wished it had been a bit longer. Brink’s vocals were riveting as she managed to hit each note of her horrific shrieks all while constantly moving around on stage, banging her head in indescribably sultry fashion. Tom Hane’s drum solo proved to be an ideal respite from the showmanship momentarily before the band returned with blistering renditions of “Whore,” where Brink donned a long black dunce cap atop her blonde locks which revealed the song’s title, and the show closer “Blood,” which forced the remaining crowd to sing along with particular fire. Often, there’s a time and a place for music and a separate one for show, but In This Moment seems to have found a middle ground that works. Scoff as you might at the intricate backdrop and stage show that sits in front of you and the elaborate costume changes and all of the mask wearing, but take all that away and you’ve got a cohesive hard rock band that can entertain you any way they like- either musically, sexually, or with some flashy decor. But the way that In This Moment has chosen to do it, somehow feels just right.