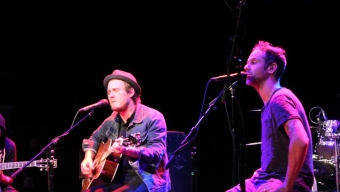 For just $3, Monday night granted a few hundred lucky fans the opportunity to see two of their favorite bands converge in an intimate space. The Music Hall of Williamsburg in conjunction with the Red Bull Sound Select series and BrooklynVegan.com would host New Jersey punk rockers The Bouncing Souls and native New Jerseyians Brian Fallon and Alex Rosamilia, as the bill’s co-headliners. Attendees meanwhile would be forced to prove their fandom, with tickets onsale at the door only, leading a lengthy line of anticipating concertgoers to stretch down North 6th Street long before the show’s 6:30pm door time. And with good reason- the evening would mark the first time in history that Fallon and The Souls would grace the stage at the same time.
Â

With support from Aye Neko and a coming out performance by Nude Beach, the evening would feature more than three and a half hours of different styles of rock music. The bands have been chosen by Fallon himself for the monthly showcase in partnering with Red Bull, and to no surprise, it is the singer himself that the fans are most excited to see. Shortly before 10pm, Fallon and Rosamilia were introduced to the audience, most of whom was filing back into the Hall’s main space in between acts. Seated at two stools, the partners paired for an hour long acoustic set, touching on some familiar Gaslight Anthem tracks with a few fun covers thrown into the mix for good measure. While the evening’s other acts were plugged in and loud, Fallon relied upon the crowd’s reverence for much of the set- something that an unruly crowd awaiting a raucous punk rock set was wont to do at times.

Fallon’s sometimes contentious relationship with New York City crowds (see the band’s recent showing at Hudson River Park) seemed equally as rocky in parts on Monday night. But in between the louder than usual concertgoer cacophony, which clearly rattled the singer from time to time, the acoustic set was actually quite captivating. Sporting a shiner up near his left eye which he claimed was a ‘punch in the face by a spider while [he was] sleeping,’ Fallon’s vocals were at their finest on this night – his voice gravelly and troubled underneath his trademark fedora. But the removal of the bass guitar and drumkit actually highlighted the singer/songwriter’s immense talents like no other time we’ve seen the band. The stripped down setting allowed the fans to handle the entirety of the backing vocals during tracks like “Great Expectations,” the performance’s finest moment. Mixing in covers like Robert Johnson’s “Love In Vain” with punk-style tracks from Roky Erickson (“I Walk With A Zombie”) and The Misfits (“Astro Zombies”), the set ran the gamut from fun to melancholy. The bluesy “Even Cowgirls Get the Blues” and the dulcet, slow version of “The Navesink Banks” brought out the singer’s softer side in a higher octave, before welcoming The Bouncing Souls singer Greg Attonito to the stage for a rousing version of “Handwritten.”

Fallon then welcomed the rest of The Bouncing Souls out for a couple of songs before leaving the stage with the band, allowing the road crew to reset the stage for the headlining set. As the clock approached 11:30pm, the audience rose to a frenzy. Fans from the back of the house rushed the stage as The Souls strode out front and center and the impact was almost immediate. A massive moshpit began with the band’s first chords of “Gasoline,” which (pardon the pun) fueled the fans’ collective release even further. You would be hard pressed to find a more fiery collection of die-hards just awaiting the opportunity to smash into each other with reckless abandon, as the entire general admission floor became a sea of outright aggression, egged on by a band that seemed to just be doing their thing on stage. Every song was met with cheers by the audience, just looking for an excuse to let loose after a relatively quiet night of music preceeding it. Although Attonito’s stage presence is mostly stoic despite the wild crowd beneath him, his vocals alongside his bandmates were dynamic and spirited. The band’s 25 year career to date is clearly no accident as their connection with their loyal fanbase was apparent- grown men singing along, feverishly rushing the stage, and even climbing up and jumping off onto a parade of hands more than willing to catch their 200 pound frames joyously. Despite a late running show that ended in the wee hours of the morning, our Jersey brethren did us proud on this night, with an hour long set rife with energy, electricity, and some other adjectives that still won’t do this piece justice, without having seen the effect The Bouncing Souls have on their fans in person.