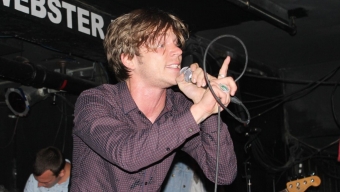 Concert Review: Cage The Elephant at The Studio

After a brief introduction to the dozens of lucky fans packed into The Studio and to a listening audience on radio, the band casually took their places on stage- not an easy feat with six performers all inching around for room and a frontman who simply exudes electricity like vocalist Matthew Shultz. If you didn’t know any better, their indie band name and reputable cred would indicate a sound far inferior than their music actually reveals – a throwback style of raw rock ‘n roll that is more of an experience and a spectacle than it is a straight performance piece. Kicking off with the first track from their new record, “Spiderhead” was an especially raucous opener. The band’s sound is confidently gritty and in such close proximity, Cage The Elephant harnessed a more punk rock side than we’re used to seeing, a much welcomed change of pace to your run of the mill rock shows. And that’s even before their wild frontman euphorically launched himself into the crowd multiple times with sheer abandon, alternating between kneeling on the hands of his fans and hanging from a pipe overhead by his feet.

Although he arrived on stage conservatively dressed in a dry button down shirt, Shultz was drenched in perspiration by the show’s close, a testament to just how hard he was working up on stage- a literal frenzy of movement that was impossible to photograph because of his convulsing bodily gyrations – in a good way. “Take It Or Leave It” evoked a rocking vibe meshing melodies The Beatles with the simplicity of The White Stripes, while the undeniably catchy “Halo” made us wish that we had given the new album a thorough listen to prior to Wednesday night’s show. Meanwhile the more familiar guitar twangs from the band’s initial hit single and subsequent delivery of “Ain’t No Rest For The Wicked” was downright awesome in this setting. The band, likely ironing out much of the new album along the way seemed to really be enjoying themselves on stage. Just as it appeared the band was launching into their first slow song of the evening, a fan, obligated to make himself a part of the show yelled out “Free Bird!” Shultz to his credit remarked, “I’m not even going to comment on that. You know you were wrong.” Although he struggled a bit to maintain the high pitch of new track “Telescope,” it was a worts-and-all performance with any imperfections only adding to the rock and roll aura inside the room.

Cage The Elephant’s first single from the new album “Come a Little Closer” and “Hypocrite” with a three man horns section were especially rousing tracks, but the highlight of the night occurred when the band welcomed another special guest to the stage. Shultz brought The Dead Weather’s Alison Mosshart out for a heart pounding duet of “It’s Just Forever” which just oozed a beautiful collaborative marriage of unparalleled sexuality and rock music. Mosshart’s blonde hair bounced on stage as her relentless voice paired brilliantly with Shultz’ crooning over a howling riff straight out of a 1980′s horror movie and brought the entire house down. “Teeth” only continued to fuel an increasingly vociferous crowd that developed more of an appetite for the band’s performance as their set neared its conclusion.

Following Shultz’s initial stage dive into the crowd, he reassured fans ‘Don’t be scared. Your parents called it rock and roll. It’s okay. It’s okay to have someone carried over the top of you’ and the band began strumming the chords of main set closer “Shake Me Down,” which resonated with the crowd perhaps better than any song that preceded it. In all, a blistering set that featured a showcase of their latest release- some of the band’s finest songs written to date- more than an hour long in duration to a small live audience and to a radio audience of God knows how big – and a newly created fan in this writer, who stood in awe watching the stage and marveling at a truly special band, just on the cusp of greatness.