3OH3! Pops Off at The Gramercy Theatre 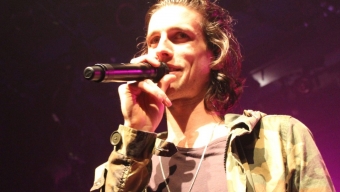 In 2008, Boulder Colorado duo 3OH3! warned us to ‘never trust a ho’ with the release of their smash single “Don’t Trust Me.” It’s that kind of sophomoric, never take yourselves too seriously brand of songwriting that lends itself to the group’s frenzy of a stage show. On behalf of the Z100 sponsored ‘Journeys Noise Tour, ‘ 3OH3! headlined a bill at the The Gramercy Theatre on Monday night with support from New Beat Fund, Wallpaper, and The Summer Set.

The band would jolt onto the stage promptly at 9:50pm to an uproar from the small but vocal crowd on hand, the first ten rows of which, it should be noted, were going absolutely bonkers throughout the entirety of 3OH3!’s 70 minute set. The lights remained dim until Nathaniel Motte and Sean Foreman trotted out to centerstage, kicking off with the high octane beats of “PunkBitch.” The band’s sound is eclectic to say the least, meshing pounding drums and electric guitars with blended electro pop beats and rhythmic rap rock that moves at such a fast pace, you’d be hard pressed to grab a photo of the band mid-song. Outfitted in a green ‘Death’ sweatshirt, Foreman handled much of the melody while bouncing around on stage suggestively. Behind him, alternating at a keyboard that he would later slam to the floor and pummel into submission, the taller, leaner Motte worked on backing vocals, alternating at times with taking over leading duties.

At times, the show felt a bit clumsy with the two talking over each other’s words when addressing the crowd, but somehow the casual, laid back vibe led to a nonstop party atmosphere at the show. Almost unrehearsed to a charming extent, the pair toyed with the audience in between songs like “Starstrukk” (no Katy Perry) and “Do or Die,” pausing to hold up a fan’s sign that read ‘We came here to rage our fucking faces off,’ which Foreman licked in the absence of having a marker to autograph it. The defiant singer’s “Army of Darkness” tanktop was a metaphor for 3OH3! in general- a playful take on a more traditional pop outfit. And while their intentions when songwriting have more than a modicum of fun to them, nobody is mistaking the band for The Beatles. In all likelihood, it’s the band’s purpose to create an energetic atmosphere, one that they enjoy right alongside the fans that come out to see them play.

The pounding electro beats echoed further during the oops-I-got-caught-cheating song “Two Girlfriends,” “Streets of Gold” and the catchy “Love 2012,” before the band headed backstage for their encore. The duo then returned, welcoming each of the opening acts back out to collaborate on “Turn the Night On,” which the bands managed to write together before the tour would commence. Meanwhile, the stage turned into a sea of bodies with about a dozen performers bouncing around singing to the crowd whether they had a microphone in hand or not. And the crowd to their credit, seemed to really get a kick out of it all. In fitting fashion, the band’s biggest hit to date “Don’t Trust Me” closed the show in signature fashion- the permanent destruction of Motte’s keyboard (which he actually gave to a front row fan), the remaining audience jumping around in unison, and the band on stage playfully reaching every high pitched note during the chorus. No, this may not be your momma’s kind of rock concert, but that seems to be just fine by 3OH3!.