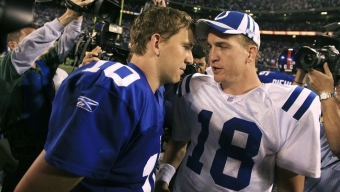 Sports
Sunday, September 15th – There’s no bigger local sporting event this weekend than Sunday afternoon’s ‘Manning Bowl.’ The New York Giants and quarterback Eli Manning welcome the Denver Broncos to town, led by Manning’s older brother Peyton. Tickets for this game are running up in price and are becoming incredibly hard to come by. Lets see if the G-Man can get off the schneid by defeating the seemingly invincible Broncos. (Giants-Broncos Tickets)

Music & Entertainment
Friday, September 13th – Movie release day. Quiet night tonight? Check out the films opening this weekend. “The Family” (R) opens tonight and sees Robert DeNiro’s return to a mob-style role alongside Michelle Pfeiffer, Tommy Lee Jones, and Dianna Agron. ‘The Family’ gets relocated to France in the Witness Protection Program where we learn that old habits are difficult to shake. Also opening, “Insidious: Chapter 2″ (R) is a horror movie sequel featuring Patrick Wilson and Rose Byrne as a family examines how they are still being haunted by childhood secrets.

Friday, September 13th – Sunday, September 15th – Another weekend with some good live music to check out here in NYC. Saturday and Sunday rockers Alt-J are throwing two sell out parties- one at the Hammerstein Ballroom and the other at Rumsey Playfield in Central Park. We’re recommending the outdoor one because 1) there are a couple of tickets remaining and 2) openers are Lord Huron. As part of ‘The Under Oath Tour’ the Beacon Theatre welcomes Dane Cook back to New York City on Saturday night. The story telling funnyman has a stronghold in New York, home to his last full length comedy album more than five years ago. The weekend closes out with the TJ Martell Foundation’s Family Day on Sunday afternoon from Roseland Ballroom. The day long event features performances from Ed Sheeran, Austin Mahone, and Jason Mraz, in an advocacy fundraiser for Leukemia.

Nightlife
Saturday, September 14th – Sunday, September 15th – Hotel Chantelle hosts the ‘Beautiful Savage’ Ceremony Issue Launch Party on Saturday night. Starting at 8pm, they’ll be handing out free issues of the magazine, photos and gift bags. All you need to do is RSVP To: beautifulsavagemag@gmail.com and that gets you inside. Tell ‘em LocalBozo.com sent you. Sunday night meanwhile, head to the Highline Ballroom for a ‘Fall For Your Fairytale’ bachelor and bachelorette auction benefitting WGIRLS NYC, bringing together young professionals in a fun and festive ‘get to know you’ atmosphere. Tickets are available here.

Other
Saturday, September 14th – The first of two of Sweet Tea City’s ‘BBQ Tailgate’ sessions goes down at the Boat Basin Cafe (the next is on 9/28). The folks behind the annual ‘Crawfish for Cancer’ benefit are taking over the outdoor venue cooking up ‘cue like none other. With live music, unlimited drinks, beer pong, TV’s to watch all the college games, and hundreds of pounds of BBQ fare, use these scant remaining warm weather weekends to really enjoy New York City. And here’s a perfect place to begin. (BBQ Tailgate Tickets)