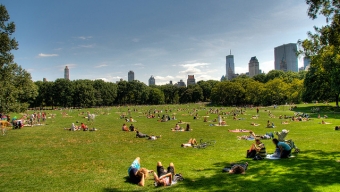 Saturday, August 17th – It’s preseason NFL action baby! Head over to Metlife Stadium to witness your New York Jets take on the Jacksonville Jaguars. This may be your one time to see the Jets win a game all year! (New York Jets)

Friday, August 16th – Movie release day. Quiet night tonight? Check out the films opening this weekend. Get ready for a “Kick-Ass 2″ time at the box office this weekend! This hard R-Rated action/comedy flick features Hit Girl & Kick-Ass taking on flesh and blood villians in this hyper violent flick featuring Jim Carrey as a Dick Tracy faced hero. Director, Lee Daniels’ “The Butler” (PG-13) features Forest Whitaker as the bulter for eight U.S. Presidents. This ambitious film features an all-star cast. Hey, even Oprah is in it!

Sunday, August 18th – Progressive metal favorites, ‘The Sword’ are heading to Williamsburg this Sunday to lay down some face melting licks and blow your mind. Castle and American Sharks have the opening slot. (Music Hall of Williamsburg)

Saturday, August 16th – Sunday, August 18th –  Prepare thy self for the first-ever ‘Nerd Nite Festival’ going down this weekend at the Brooklyn Lyceum. Drink free beer and cheap wine while you check out Drunk Science, hosted by the producers of Radiolab and Popular Science‘s Jake Ward. Or maybe you’ll want to check out the history of Godzilla! If these are the types of things that concern you, $100 for the whole weekend will get you the answers; individual day passes are available for $30.  (Nerd Nite Festival)

Sunday, August 18th – Like tomatoes? How do you not- it’s summertime! Sunday night, hit up Chelsea Market from 6-8pm for Tomato Fest 2013′s culmination – a tomato themed cocktail party. Benefitting Food Systems Network NYC, taste some tomato based cocktails hosted by the folks at The Green Table. And if that’s not enough, Brooklyn Brewery and Greenhook Ginsmiths are going to be pumping out the spirits and much much more. Close out your weekend in style Sunday night and benefit a good local cause. (Tomato Festival 2013)