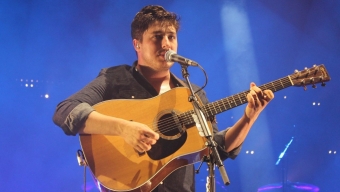 The long walk from urban city street, through the alleys of a suburban style tennis center- past an array of courts and swimming pools- until reaching the exterior of the old stadium, was a unique one. Thousands of drunken and excited fans filed in at once, crowding the assembly of food trucks and forming seemingly endless bathroom lines. But once inside, the venue was utterly surreal- the setting, only enhanced by a sold out audience, standing for the entirety of the band’s two hour performance. New York City crowds show varying degrees of emotion and more often than not are stoic even in the face of authentic excitement. But to the band’s credit, this was a folk rock music party through and through.

Some light rain drizzling teased before the band strode out to center stage to one of the loudest ovations you’ll ever hear. But surprisingly, the same volume of applause seemed to ring out with the opening chords to each song the band played. Although much of the focus revolves around frontman Marcus Mumford, who alternates between playing guitar concurrently with a kickdrum and singing at a full drumkit behind the stage, the spotlight shines on all four band members at once, positioned side by side at the front of the stage. Joined by a three piece horn section and an extra set of stings behind them, the band plowed through an impressive selection of cuts from their first two albums, throwing in a cover song here and there for good measure.

Mumford & Sons ripped out hits like “I Will Wait” and “Little Lion Man” pleasantly early in their set which the stadium literally erupted for. “Love of the Light” meanwhile, was particularly outstanding with the frontman playing the full drumkit, leading the way with each kick like a conductor urging the crowd to clap along accordingly. “Hopeless Wanderer” was particularly rousing and “Awake My Soul” brought out both opening bands to join in continued the band’s frenzied pace, but “Dust Bowl Dance” proved to be the fastest paced track played by the band, with guitarist Ben Lovett pounding his head and body as if he were performing with a metal band.

The heavier rain began to fall just as the encore began, but the band returning to the stage made the capacity crowd forget all about getting wet. The house lights remained on as the four piece band surrounded a sole microphone as the frontman asked the crowd to “put away [their] cameras so that we can all be present together.” Amid a shushing around the audience directed toward some unruly fans, the band began a sweet cover of Bruce Springsteen’s “I’m On Fire,” a delight to just about anyone with ears and a similarly harmonic rendition of “Reminder.” Closer “The Cave” was about as fitting a capper to an outdoor summer concert as one would hope for as Mumford acknowledged- “It’s fun to be here man. It’s really beautiful.” As fantastic a performance put on by the band on this night, it was hard to not be overwhelmed by the true spectacle of the crowd, who danced along energetically until the show’s conclusion. Quipped the singer, “49 years ago today, The Beatles played on this stage. 48 years ago today, Bob Dylan played on this stage. And now today, four Londoners came and shit all over it.” There’s about 17,000 New Yorkers today that would likely disagree with his sentiment.