The Lumineers at Terminal 5: A LocalBozo.com Concert Review 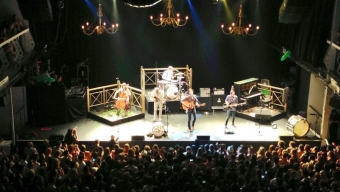 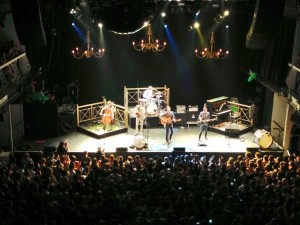 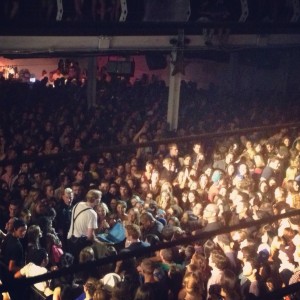 It took all of five minutes for every remaining ticket to Monday night’s American Express exclusive show at Terminal 5 to be evaporated by a few thousand rabid New Yorkers. The venue’s intimate setting coupled with the meteoric rise of Denver Colorado folk phenoms The Lumineers proved to be one of the most anticipated one off shows in the City’s recent history, evidenced by swarms of hopeful concertgoers still trying to procure tickets right outside the front doors just minutes before show time. Without an opener to kick off the show, The Lumineers used every instrument in their impressive musical arsenal during a ninety minute headlining show that featured a good deal of foot stomping, crowd singing, and folksy-dancing from a mostly young, excitable New York crowd.

Although Terminal 5′s doors opened at 8pm, the line of entry was perhaps longest just before 9 as the band was set to take the stage. The mostly female skewing audience feverishly rushed the standing room only floor, putting themselves in perfect position to lift their iPhones overhead and film whatever they could of the five-piece band, who continually egged them on with a rousing array of tracks from their incredibly catchy self-titled debut album (2012). Some veteran artists have a difficult enough time filling far smaller rooms than The Lumineers, who catapulted into the mainstream with the release of their hit single “Ho Hey” and legitimately sold this space out and then some. Adorned with three massive candelabras, the stage was setup intricately as if the band was performing right in your own living room- a look and feel that fits the band’s show, which is to a degree, purposefully unpolished and natural.

As skilled as they are as musicians, The Lumineers’ stage show is equally as entertaining. Drummer Jeremiah Fraites and pianist Stelth Ulvang energetically bounce around the stage from instrument to instrument riling up the live crowd, while fedora donning frontman Wesley Keith Schultz somehow croons better in a live setting than he does on the album. The crowd also went wild each time cellist Neyla Pekarek approached the microphone, often beautifully harmonizing with Schultz throughout the performance. With just one album under their belt, the band played it in its entirety, which is not to say that the band didn’t mix it up effectively. Applause leading to the opening track “Submarines” was literally deafening as late arriving attendees shuffled toward the center floor of the three level space. “Ho Hey” made a surprisingly early appearance in the set, kicked off by the entire audience singing the first verse a cappella while the band conducted them with a sole tambourine. Peering around the room, we were hard pressed to find a single person not singing the chorus right alongside the sea of strangers next to them. Schultz harnessed his inner Bob Dylan with a tremendous cover of “Subterranean Homesick Blues” followed by an equally Dylan-esque rendition of “Dead Sea,” a virtual certainty as a future hit single.

As he played, the electric frontman alternated between wearing his funky hat and positioning it stylishly on the end of his guitar. But the evening’s most memorable moment came as Schultz jumped over the barricade with the help of security and parted the crowd down the middle, standing atop a chair at the back of the floor and performing “Eloise” while surrounded by fans in disbelief. Concluding the main set was a spirited rendition of “Stubborn Love” before the band encored with “Morning Song” and the hand clapping anthem “Big Parade,” which suitably turned the concert hall into one collective dance party.

It’s a bit surprising that folk rock music has made such a dramatic comeback in the early portion of the decade. But time and again, as music evolves it also looks to its roots and in 2013, The Lumineers are as honest and as straight forward a band there is. And with a slew of sold out shows, an album that charted at number two on the Billboard 200, and an entertaining band of skilled musicians, another wildly successful stop in New York City is but another small step in the band’s skyrocketing career- one that is somehow only just beginning to bud.