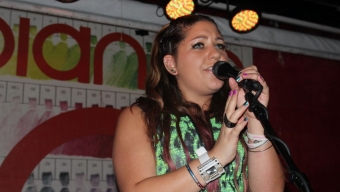 At LocalBozo.com, we travel New York City from borough to borough bringing our readers the best in live music coverage, from shows at the Barclays Center and Forest Hills Stadium to Irving Plaza and Terminal 5.  But we also like to expose you to some artists that you probably haven’t heard from- perhaps some up and comers on the Indie scene.  And here now, is our latest entry into LocalBozo.com’s “Indie Music Spotlight.”

In the ever changing and competitive music scene, our outlet is thrilled to expose you to independent artists on the rise. On Tuesday night, singer-songwriter Jodi Good celebrated the release of her debut EP, “Definitely Different” at the popular Lower East Side venue Pianos for a combined performance and party.

Shortly after 6pm, the singer’s friends, family and fans converged on the performance space to have some drinks and food as they congratulated her on the debut effort. Once everyone had enjoyed some spirits it was time to get Jodi Good on stage to belt her heart out. Good took the stage to a welcoming applause, wasting nary a moment to use every available minute of stage time to her benefit, with humorous banter, appreciative shout outs and of course a variety of original and cover songs. Speaking of great covers, Good kicked the night off with a terrific cover of Kacey Musgrave’s, “Follow Your Arrow.” The young singer seamlessly hit every note of this classic song that we would learn was introduced to her by her mother.

Good beautifully embodies the best facets of country music with a tinge pop seamlessly mixed in proven by the next two songs- “Loving into Leaving” and the passionate “Stranger To Me.” Both were flawless examples of her country twang, while the acoustic version of Paramore’s “Still Into You” showed off Good’s overall range. This cover and the next two originals “Where Did We Go Wrong” and “Skin and Bones” boldly show off Good’s penchant for writing heart-felt relationship themed music. When they say pain translates into great music, they weren’t just whistling Dixie.

Good’s abbreviated opening performance clearly showed off this up and coming singer’s true talents. And when she had no more songs left on her setlist, the audience would literally not let her leave the stage. It took little convincing to have Jodi sing a heartfelt a cappella rendition of her single “Definitely Different” from her new EP. This impromptu song solidified Jodi Good as a true talent who you need to check out now while she is on the rise.