Trapt at The Gramercy Theatre: A LocalBozo.com Concert Review 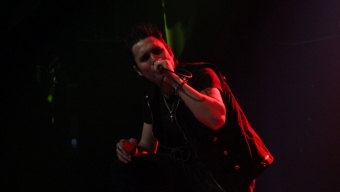 Positive vibes are not always prevalent in the rock genre. But when it comes to singing about confronting life’s trials and tribulations in an uplifting way, turn of the century hard rockers Trapt have their finger attached to the pulse of our collective feelings. On Tuesday night, The Gramercy Theatre spent a warm spring evening rocking out and keeping spirits high as the band headlined a jam packed show here in Manhattan.

At 9pm, the boys of Trapt hit the stage blanketed by complete darkness. There was no introduction from a disembodied voice or some pump up song courtesy of AC/DC. Instead, lead singer Chris Taylor Brown grabbed the mic and gave a simple what’s up to New York City before launching into “Who’s Going Home With You Tonight?” Right from the jumpoff, the crowd of diehard Trapt fans sang in unison to the perfectly chosen opener. Although the opening banter was kept to a minimum, it was clear that the band was genuinely appreciative of the fans who came out on this night. And without wasting much time rocking the New York City faithful, “Waiting” and “End Of My Rope” were quick to follow, before “Bring It” openly showed the band’s aforementioned love for preaching the gospel of controlling one’s life. And on a more relaxed level, it also allowed the audience to headbang a little as well.

Fans of early Trapt releases also had plenty of treats peppered in as the band rocked out a killer version of “Echo,” from their self titled album. The popular tune was perhaps performed even better than the studio version before “These Walls” and new track “Experience” brought the tempo down without any let-up of energy from the bodies of the fist pumping fans. Let’s just say they gave the audience a chance to catch their breath while still letting the passion emitting from the stage sink in. “Bleed Like Me” and “Contagious” had the exact opposite effect by kicking us in the ass like a bullet train showing off both Brown’s pipes but also how technical the band can be when playing at their heaviest. Strong bass noodling and near Alice In Chains levels of a tuned down lead guitar left us with a sore neck and throat. But at the same time a huge smile planted across our face like The Joker’s Glasgow grin.

About halfway through the set Brown made it clear to this nearly sold out crowd how good of a time he was having when he screamed, “You Fucking Rock New York City.” The nearly twenty song set clearly showed how well versed Trapt is at both pleasing their fans, while exposing them to some new choice nuggets along the way. Yet in the end we circled back to where it all began when Trapt closed the show with their mega mid-2000′s hit “Headstrong,” giving us an old school arena rocker while at the same time showing us just how far they have come.