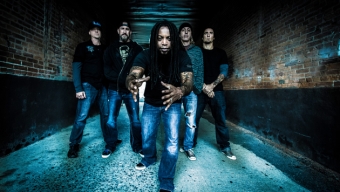 Over the past two decades, rock band Sevendust has earned a reputation as one of the hardest working bands in music. With the release of their ninth studio album in March (“Black Out the Sun”), the band has managed to release music that is somehow always changing but remarkably consistent, along with a certain resilience to remain closely intertwined with each other even as different side projects emerge from within the group. Sevendust, whose penchant for incredible live performances is ultimately correlated with their ability to tour for months at a time on end, made a recent stop at New York City’s Best Buy Theater, playing an outstanding and pulverizing headlining show that featuring support from Lacuna Coil and Coal Chamber, to a jam packed house in Times Square.

Equally as much metal as they are melody driven, the band is led by their soulful frontman Lajon Witherspoon, whose deep and raspy voice are as unique as his long flopping dreadlocks, which bounce at every pounding of his skull. Witherspoon’s undying connection with his fans –‘the family’ as they are known- is obvious both on and offstage- he feels genuinely fortunate for the band’s run of success. With internet rumblings of a forthcoming solo album, LocalBozo.com was fortunate enough to grab Sevendust’s Lajon Witherspoon for an exclusive interview a short time after the band’s blistering performance in Manhattan. Listen in as we discuss his reflections on the show and his anticipation to play in New York, the recording process for “Black Out the Sun,” his thoughts on his bandmates’ side projects, a potential solo album, and his reflections on his journey with Sevendust at age 40. Honest and open, it’s a conversation that any fan of the band will certainly appreciate. And if you haven’t yet seen Sevendust perform live- well what are you waiting for?

LocalBozo.com: LJ, thanks so much for giving us some time today man..

Lajon Witherspoon: Hey, it’s a pleasure to talk with you brother. Thank you for taking the time.

LocalBozo.com: Listen we’re based out of New York City and just a few short weeks ago, Sevendust played a killer show here at the Best Buy Theater. Let’s talk about, if we can, your reflections on that show couple weeks back, and maybe some of your memories of yours about playing here in New York City.

LW: Oh man, you know first off New York for me personally is one of those towns that I always look so forward to getting to. We kind of started- I think Sevendust, the seed, after coming from Atlanta was really started in New York with WSOU and stuff like that, and CBGB’s, and The Bitter End, you know and things like that. So it’s always been beautiful stories and experiences for us. That last show- I couldn’t wait because the anticipation for me after taking off that while before we recorded “Black Out the Sun” was an energy that I felt like we needed to tap into again and when we did it was incredible. It was one of the better shows on the tour I think.

LocalBozo.com: Now the band is just wrapping up a tour with Lacuna Coil and Coal Chamber. You’ll be heading out for some dates with Pop Evil and doing the festival circuit. But what about this summer- can we expect a full-fledged headlining tour?

LW: Well you know what, right now everything’s kind of up in the air. We’ve got our hooks out there in the water and hopefully picking up a cool summer tour so we’re just trying to see what’s gonna happen. But definitely we’ll be out in support of “Black Out the Sun” and working hard ’cause it’s only the beginning of it.

LocalBozo.com: You just touched on “Black Out the Sun.” It’s unbelievably the band’s ninth studio release. Talk about the difference between putting this album together versus previous Sevendust records.

LW: Well you know we just went in constantly deciding not to go in with any materials- just to go in as a band and do what we do and that’s just rock out and play music and that’s what we did. And it was great. We had two setups where we could record live in both rooms. And then we had like different isolated rooms where we could go and work on vocals or, you know, whatever we wanted to work on. So man it was a great environment. We did it for thirty days. We blocked the studio out from 12 to 12- twelve noon to twelve midnight every day except for Saturday. And we’d come right back in on Sunday so it was like a busy beehive. It was just music.

LocalBozo.com: Banging that album out in just thirty days, did you guys feel any additional pressure- did you put any more pressure on yourself to get everything done in that timeframe?

LW: Oh not at all. I can say this- if we wouldn’t have been happy with the material that we had in those thirty days, we would not have left.

LocalBozo.com: Well listen, the band’s last few albums have each been consistently good with each one being a little bit different from the one that preceded it. But with nine studio albums now, how much more does this band have left in the tank?

LW: I don’t know man, I still think we’ve got so much to do, you know? I just turned forty. I love music and it’s in me and it’s in us so as long as the people care- and they seem like they have cared and that’s what’s kept us going- God knows that. It’s those beautiful family and friends out there that support Sevendust. As long as they wanna hear it, we’re gonna keep doing it.

LocalBozo.com: You know Lajon, in recent years most of the band members seemed to have gone on and done their own side projects- from John [Connolly] with Projected, to Clint’s [Lowery] solo work, Dark New Day and of course with Morgan [Rose] in Call Me No One. You, we’ve heard rumblings that there could be a potential solo album coming. Is this something that the band needs- this creative outlet for each band member in order to effectively keep Sevendust together, working positively when they do come back in the studio?

LW: I think it’s a great outlet. You know, I was able to work with some bands and I did my first score with the Moscow Orchestra and a band from Connecticut- Earthside- which was incredible. I feel like Sevendust is definitely my priority right now and I don’t feel like it’s the time- I feel like it’s a chess game. You have to pick and choose when you move and you know, after this slows down, I would definitely like to get into my solo and the obscure stuff that I like and let the people out there know and see how many different things that I’m into. But you know, I think it’s good to have different energies out there and different avenues. I think all that helped with the making of this album. We came back together and the heart grows fonder and we were able to just sit down and just let it flow and that’s what happened.

LocalBozo.com: Now the heavy metal and hard rock communities have literally been abuzz on the internet about a potential solo record from you Lajon. Do you have anything else for us on that front? Have you started doing any writing or any recording? What’s the latest on your potential solo album?

LW: Nah I’m just- you know- talking about it, talking to some different cats, you know?

LocalBozo.com: You know as you look back on the two decades or so fronting this band, what’s been the most rewarding part of the journey for you so far?

LW: The people that have supported us- that’s success to me. To be able to go to these places and sell them out. People singing your songs. You know what’s even better success? When I see that 21 year old kid that’s the same age when we first started. Now he’s 40 like me, he’s got his kid at a Sevendust show. And his kid’s got his girlfriend- maybe even the kid’s got a kid, you know? It’s a family affair, but that’s success.

LocalBozo.com: Alright Lajon, one last question if we can- if you take a step back and look at Sevendust as a whole, they’re really one of the most unique bands to come along potentially ever. I mean, a rock band with an African-American lead singer and sort of a metal band that focuses so much on melodies. It’s a band that really defies labels. What do you think it is about Sevendust that’s allowed it to have this loyal following of fans that’s given you the longevity you’ve had over your whole career?

LW: Django! No, I’m just kidding. I said Django (laughs). I just think because we keep it real man. We’re just a bunch of country boys that like to play rock n roll music and with soul and we talk about and we write about things that happen to us and I think it happens to everybody in this world. And that’s what keeps us going man- we’re just a real band. We’re just a bunch of guys that like each other and love music.

LocalBozo.com: Alright Lajon, you’ve been so gracious with your time today. Is there anything else you’d like to leave for the readers of LocalBozo.com?

LW: Thank you very much man and thank you for taking the time..

LocalBozo.com: Fans, “Black Out the Sun,” the ninth studio album from rock band Sevendust is available now wherever you buy your rock music. For band info and tour dates, you can check them out on Sevendust.com and follow them on Twitter @sevendust. We’ve been fortunate enough to be sitting here speaking with frontman Lajon Witherspoon. All the best of luck in 2013 and we can’t wait until you’re back in the New York City area my friend.

LW: Thank you- God Bless you man. I’ll talk to you again.